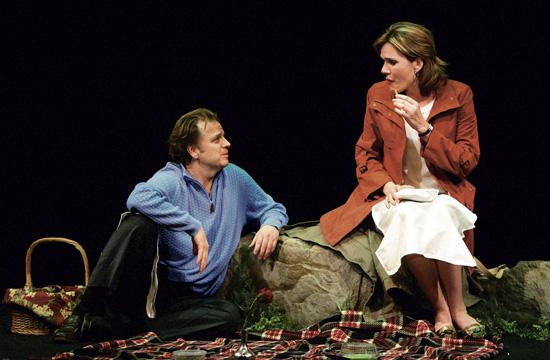 Opening on the heels of the recent tragic shooting in Tucson, Ariz., Neil LaBute’s “The Break of Noon” is especially timely as it shines light on one man’s coping mechanism when faced with the loss of 37 co-workers from an office massacre.

LaBute’s knack for story telling once again shines in this powerful script, which unfolds like a surgeon cutting through layers of epidermis to reach the infected area. The playwright explores whether a man, who has lived a less than admirable life, can be transformed as a result of a traumatic experience and make a positive contribution to society. The other question LeBute subtly poses is the flip side: has the protagonist, Mr. Smith, actually been transformed or is he a rank opportunist who wants to achieve fame, which could include appearances on the “Oprah Winfrey Show” and “The View.”

Under the skilled direction of Jo Bonney, the play begins with the sole survivor of the massacre, John Smith, played multi-dimensionally by Kevin Anderson, sitting on a stool recanting the gruesome event, which he describes as horrible and surreal. As Smith reveals more of the details, he struggles with the images of dead people strewn about the work place and we feel great sympathy for his ordeal. He insists the reason he is the sole survivor is that God spoke to him and instructed him to stay still and he would be saved. Smith reveals that as a result of this celestial instruction, he would try to live a better life, spread the Gospel, and plans to begin a personal journey to make amends to those people whom he abused.

Smith’s revelations are met with mixed reactions, to say the least. Some of the characters suspect him of profiteering from a tragedy that includes the potential sale of his photos of the death scene.

Towards that end, he visits a cynical attorney, played nicely by John Earl Jelks, who advises Smith of the potential profit from his photos. Later in the play, Jelks also plays a detective who’s not buying the God visitation story and is suspicious of why Smith is the sole survivor, especially since the shooter, Juan Diaz, was actually fired by Smith.

Mr. Smirth asserts that Diaz put the gun in his mouth but it misfired, not once, but twice, saving his life. Slowy LeBute reveals humiliating events that led up to Diaz’s flipping out, including a disgusting incident when human feces were put on Diaz’s desk. While not justifying his actions, Diaz’s revelations put a face on the abuse leading up to his deadly revenge.

Smith begins to realize his own fault in the masacre when his ex-wife Ginger, wonderfully played by Catherine Dent, doesn’t believe any of his supposed transformation. She is suspicious of his attempt to apologize for past transgressions that he says are being offered at the behest of God. In short order, we see the “real” Smith who has a short fuse and explosive temper.

Again, we glimpse inside a less than honorable Smith via the character of Jesse, an ex-girlfriend with whom he was having an affair while he was married. Despite his ill treatment of her, she still loves him. Dent, who played Ginger, also plays Jesse. Her characterizations are so distinctly different and fully actualized, that it’s hard to recognize that the same actress is playing both roles.

Smith’s television appearance on a talk show hosted by Jenny, played by Tracy Chimo, is probably the weakest link in the production as Chimo, in an attempt to telegraph her disbelief of Smith’s story, shamefully mugs to the audience an over-the-top, strident performance which was out of sync with the rest of the performers. It’s unclear as to whether this is an actor’s choice or directorial instruction, but it did not serve the play well. Chimo is more effective as a French prostitute to whom Smith pays a visit, at which point she has an authentic emotional moment when Smith encourages her to pray, furthering his realization of fault.

Technically, the production is well served by the lighting of David Weiner and sound by Darron L. West, both of which nicely escort the scene changes.

The question of Smith’s authenticity is the thread throughout this 90-minute play with a surprising raison d’etre in a classic LeBute fashion. “The Break of Noon” should definitely be added to your play list.