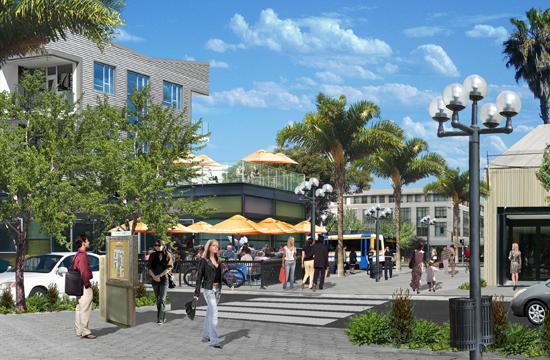 It was once said the pen was mightier than the sword.

For an overwhelming majority of Santa Monica’s post-World War II development, one place where the pen had the most might was near the corner of Olympic Boulevard and 26th Street, where pens for everyday use were manufactured by the conglomerate known as Paper Mate.

With Paper Mate’s doors long since closed down, there is a debate in the city as to what should be made of the vacant lot located at 1681 26th Street. As the Metro Transit Authority pushes forward its plans to bring the new Exposition Line into the city and identified the Bergamot Station area as the first stop for inbound passengers, it seemed as if all the pieces were in place to finally make use of the former Paper Mate site to be redeveloped.

Things became interesting when Hines, an international development company, submitted its proposal to build a village-like project at the old Paper Mate site and complement what is planned to be a Bergamot Station stop when the Expo Line arrives in 2015.

Yet, in light of the heated debate and discussion at the council’s meeting on March 22 at City Hall, what seemed like a well-intentioned development plan has now become the controversial “Bergamot Station Village.”

Whatever the future holds for this site, it certainly has a history. In 1957, about 11 years after the City earned incorporation (and 12 years after the end of the second World War), Paper Mate brought one of its manufacturing plants into Santa Monica. Reportedly the home of more than 1,000 jobs at its peak, chronicled accounts indicate Paper Mate competed with likes of Douglas Aircraft, Merle Norman, and Louver Drapes as the leading employers within Santa Monica during the 1960s and 1970s.

Paper Mate’s manufacturing plant was a steady presence in what was the industrially zoned portion of the city. About five years ago, Paper Mate’s parent company, Sanford North America, pulled the rug from underneath the pen manufacturer’s Santa Monica operations and ultimately bifurcated it to a plant overseas and a facility in Goodyear, Ariz., just outside Phoenix. The site has been vacant ever since.

Now zoned for mixed-use development, a small piece of history at the southeast end of Santa Monica might be turning into a major problem. That problem involves Hines, a Texas-based developer who reportedly spent about $73 million to purchase the Paper Mate site to develop into what would be known as the “Bergamot Transit Station Village Center.”

Hines’ lofty plans came to friction on March 22, when the development agreement (DA) it sought with the City was up for consideration at the City Council meeting. Amidst a nearly four-hour presentation, public debate, and council discussion, Hines tried to make a case for its proposed five-building development on the 7.1-acre site directly across the street from the planned Expo Line Bergamot Station stop.

The mixed-use proposal incorporated residential, corporate, and commercial uses, including open spaces for parks, plazas, a playground, and landscaping. In addition, the proposal featured about 1,961 parking spaces in a three-level subterranean garage.

Planning Director Eileen Fogarty said the area surrounding the old Paper Mate plant was originally zoned under the City’s General Plan for industrial use, but is now ripe for more mixed-use, urban-themed development.

“Here is an area that has been industrial, it should transition into a mixed-use, urban transit village with creative jobs, a variety of housing, and, certainly, local serving retail,” she said.

Accordingly, with the anticipated arrival of the Expo Line, the Bergamot Village area seemed ripe to realize the City’s General Plan and further the spirit and intent of the City’s Land Use and Circulation Element (LUCE).

“The LUCE basic approach was to redirect pressure away from the residential neighborhoods … toward the transit corridors,” Fogarty said.

Accordingly, the Paper Mate site seemed ideal for a transit village to be built and allow the City to “achieve a sustainable community,” especially with the planned construction of the Bergamot Station stop for Expo Line travelers. Colin Shephard of Hines said he hoped his company’s development would provide more than three acres of open space and would also conform to the LUCE.

“This project is entirely in compliance with the parameters of the LUCE, and it is a transit-oriented development that is entirely sustainable,” Shephard told the council last week as it deliberated whether to enter into DA negotiations with Hines.

Whether the planned project is in compliance with the City’s residents is still up for debate. Nearly 30 speakers who shared their respective opinions, during the public hearing portion of the council’s agenda item on Hines’ proposal, spoke both in favor and opposed to Hines’ development plans at Bergamot Village. One local group questioned whether the council was improperly influenced by approximately $45,000 worth of campaign contributions made by Hines 26th Street, LLC, to five of the seven members sitting on the dais.

Valerie Griffin, chair of the Wilshire/Montana Neighborhood Coalition (Wilmont), said the planned “Bergamot Village” was too big for its own good, saying “no one asked for a huge commercial development” and the proposed development is “a huge village-in-name-only.”

Still others supported the Hines proposal, saying the development pitched to the council on March 22 was a much needed benefit to the City’s economy.

Either way, with the council’s decision to hold off on making a decision to move forward in its DA negotiations with Hines, the planned Transit Village at Bergamot Station is still nothing more than an idea and the old Paper Mate site will remain vacant without a future for a little while longer.

Though, as Planning Commissioner Ted Winterer pointed out, Santa Monica residents were vociferous to forestall a development they felt was not right for the city.