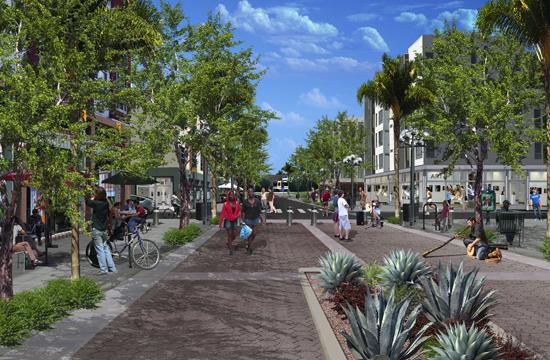 After nearly four hours of public comment and deliberation on the former Papermate site, all the Santa Monica City Council could do at its March 22 meeting was to tell the contingency representing Hines, an international development company, “try again.”

While those last two words were not literally uttered in the wee hours between Tuesday evening and Wednesday morning, the council extensively debated whether to move forward with a nearly one million square foot mixed-use development at Bergamot Station before deciding to balk at commencing negotiations to enter into a development agreement (DA) with Hines. At that time, several disgruntled Hines representatives walked out of council’s chambers noticeably frustrated about the lack of a decisive outcome about redeveloping the old Papermate facility into a modern “village.”

Referred to as Bergamot Transit Village, the currently underdeveloped parcel of land on Olympic Boulevard near 26th Street is part of City Hall’s grand vision to recreate the area into a major transit hub revolving around the construction of Metro Rail’s Exposition Line into Santa Monica.

One of the Expo Line’s three stops in Santa Monica is planned for Bergamot Station. Eileen Fogarty, the City’s planning director, called the development “the driving force behind the transit center in Bergamot Village.”

“This project is one of the most significant land use decisions the City will make,” Fogarty added in her staff report.

About 30 people, mostly Santa Monica residents, spoke during the public hearing portion of the agenda item. A few believed Hines’ design proposal for Bergamot Transit Village was a welcome addition to the city. Others were concerned the development plans presented to council would not provide a public benefit to Santa Monica in accordance with the Land Use and Circulation Element (LUCE).

“Any development must be offset by real public benefits for the people of Santa Monica, especially those who live near it,” Valerie Griffin, chair of the Wilshire/Montana Neighborhood Coalition wrote to the council, stating the Hines project at Bergamot Village would be a “huge commercial development.

“People want a real ‘village,’ not a huge village-in-name-only. It is not fair to other developers to allow this or any project to use more community resources than anything the LUCE-based Bergamot Area Plan can squeeze out of future projects. It is not fair to the residents to permit development that is so far from any rational definition of a ‘village,’” she added.

With the addition of the Expo Line through the city, council saw an opportunity to redevelop a once plighted portion of town in pushing forward a plan to cultivate about 960,000 square feet of land into a “village” of residential, office, open space, and retail use. However, with mixed public support and a staff report citing various deficiencies within the Hines design proposal, the council was not poised to move forward with DA negotiations.

“Why are you here tonight?” Council member McKeown asked, amidst some applause, as he looked in the direction of Hines’ representative Colin Shepherd and his colleagues sitting in the gallery. “The timing is not ripe for this project, and the project is flawed.”

The various flaws and shortcomings pointed out by City staff included circulation issues, uses locations of specific buildings relative to other structures and spaces, less than ideal placements of new roads, lackluster and monotone design, deficiencies of varied building heights to create a “skyline” effect, among others.

One member of the public said Hines’ proposed building designs “looks like the boxes that the Water Garden came in.”

A heavy hitter amongst private international real estate developers, Hines was tasked to design and, if a DA were eventually agreed to, develop a five-building campus on the narrow site.

Shepherd, a senior vice president at Hines, spoke to the council at length after Fogarty’s staff report about the feasibility of making possible changes to the proposed design plan. Specifically, he said it would be difficult to bisect buildings in order to create more north-south roads to connect the southerly-situated Olympic Boulevard to the northern reaches of the development area. He further added his development firm has already adhered to Planning Commission pleas to improve the project’s aesthetic appeal and circulation issues, such as modifying the location of open spaces and tweaking sidewalk setbacks.

Responding to council’s suggestions to resize or reposition some of the five buildings, Shepherd said such recommendations did not make business sense, claiming while ideas like making one large building into two smaller ones may be appealing for circulation and aesthetic purposes, such a strategy is not conducive to attracting corporate tenants, large or small, to lease spaces there.

Shepherd maintained Hines made every effort to ensure the designs were “entirely in compliance with the parameters” of the LUCE. Despite his comments and assurances, the council directed staff by unanimous vote to continue working with Hines on project redesigns in the context of the various recommendations and concerns raised at the meeting.

Just the same, the council’s decision meant staff was not directed to initiate a DA negotiation.  City officials have expressed hope that this site – one of the largest development projects ever within Santa Monica – would set the tone for its grand vision for Santa Monica’s redevelopment as outlined in the (LUCE), an instrumental agenda in guiding developments of how to design projects to meet the City’s aesthetic demands while also balancing environmental concerns and cutting down on traffic. (See “Hometown Hero: Eileen Fogarty” on pg. A10 of this issue)

“This is the cornerstone of the new Santa Monica,” McKeown stated. “Whatever we do here both because of location and where it is in the process of building out this neighborhood is really the deciding moment in going forward.”

Council member Terry O’Day was not present at the March 22 Council meeting.