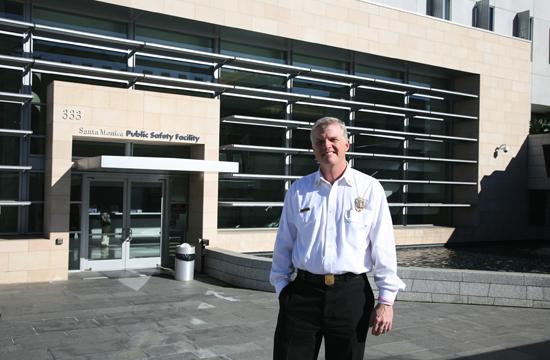 The short drive up the San Diego Freeway from Manhattan Beach to Santa Monica is not a long one, but when it comes to local lifestyles and cultures, both communities are eons apart. Scott Ferguson’s first year as chief of the Santa Monica Fire Deptartment (SMFD) may metaphorically be described in the same manner – so little time has passed, yet, at least in Ferguson’s eyes, so much has happened.

“It kind of snuck up on me,” said Ferguson, who came from Manhattan Beach’s fire department to Santa Monica’s. “So much has happened in a year. I think this is my 29th year, I don’t think I’ve had any fly by so quickly.”

Part of what may have made the Chief’s first year fly by so fast may have been the increase in annual call volume in the City of Santa Monica as compared to the previous fire department that called him boss down there in Manhattan Beach.

Interestingly enough, Ferguson, who beat out nearly 70 candidates for the fire chief position, added that the workload at SMFD was rather comparable to his previous stints in the Pacific Northwest and the American Southwest. The son of a fire chief, sibling to a fireman, and father to a budding firefighter, Ferguson had his eyes on the prize since day one.

Spending four years in Eastern Washington, 14 years in Vancouver, Wash., more than five years in Peoria, Ariz., and about two years in Manhattan Beach, Ferguson made his way up and down the Pacific region with securing a fire chief position in mind.

“I got good advice early that if I wanted to be a chief, I needed to chase it down, so I took more of a business approach to being a fire chief,” Ferguson said. “I guess a generation ago, (one) waited for his shot in their department and then had to compete internally, but these days, it’s much more competitive and the expectations are far greater.”

After making his way through several agencies, Ferguson finally arrived in Santa Monica with his desired goal finally attained; last March, Ferguson was introduced by City Manager Rod Gould at a city council meeting as the head of the SMFD.

One year later, Gould pointed out Ferguson has done many wonderful things for both the department and the community, literally picking up from where he left off in Manhattan Beach.

“Chief Ferguson has brought leadership, energy, and enthusiasm to the Santa Monica Fire Department in his first year at the helm,” said Gould, who started in his position just over a year ago also. “[Ferguson] instituted the department’s first strategic plan in its history and is devoted to making a very good fire department even better.”

Ferguson spearheaded a similar strategic plan as the fire chief at the Manhattan Beach Fire Dept. and cultivated many relationships within the community with regard to emergency response and preparedness. Just the same, in light of the recent natural disasters in Japan, Ferguson urged Santa Monicans to have an established emergency preparedness plan should earthquakes and tsunamis potentially strike the city and region. While no one can fully prepare for the worst that may come Santa Monica’s way, Ferguson believes the SMFD is among the elite.

“I think Santa Monica is part of … the best mutual aid system in the world,” he said. “We’ve got excellent firefighters. Based upon my experience at other agencies and other chiefs, not all firefighters are necessarily as motivated as ours are. They have a certain sense of pride [and] are very involved.”

As he observes and comments on the positive commitment of his fellow firefighters within the department, Ferguson said he had so much to learn on the job from the moment he arrived in town.

Still, Gould believes Ferguson has performed rather well in his first year as fire chief.

“He is a firefighter first and foremost, but he is also a leader, manager, teacher, and mentor. Scott brings best management practices to our city that will benefit our residents and businesses for decades to come,” Gould said. “He has worked extremely hard and has had a lot of impact in his first year. I can’t wait to see what the coming years will bring.”

If his first year is any indication, Ferguson may be bringing a whole lot more to Santa Monica.