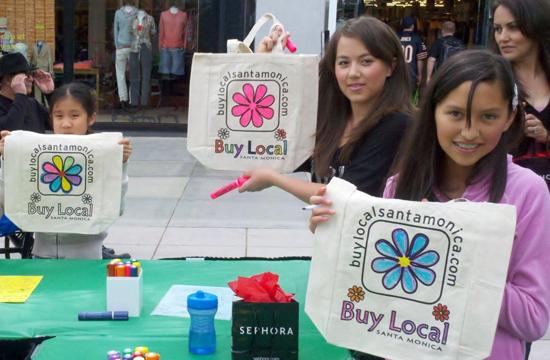 Shoppers had the opportunity to shop for a variety of goods and services from the more than eighty businesses that participated in the expo or could make purchases from the city’s other major shopping districts – Main Street, Montana Avenue, and Pico Boulevard or anywhere else in the city. After making purchases many shoppers turned in their receipts to be eligible for a raffle to win one of six $1,000 baskets of goods and services donated by merchants from the different shopping areas of the city.

The Mirror had the opportunity to talk to several of the businesses that participated in the expo. One of them was the non-profit ZeroTrash.org. Their website states that they are “a community clean-up project committed to ridding city streets of trash, reducing waste, supporting local businesses, and taking personal responsibility for the environment.” Their Chief Operating Officer Eric Chevalier told the Mirror “they started in 2007 in Laguna Beach and a new chapter will be coming to Santa Monica this summer.” Each of their chapters hosts a community clean-up event the first Saturday of every month for two hours which includes a street clean-up by local residents. They also advocate for local governments to provide the necessary infrastructure for public recycling, trash, and cigarette-butt disposal. They also conduct “Trash Talks” at school assemblies to teach students to reduce waste, to recycle, and how to make composte. They are supported by local businesses and organizations such as Miocean and Xsenergy.

Another business was CODA, a privately owned company headquartered in Santa Monica that designs, manufactures, and sells electric vehicles and lithium-ion battery systems built for transportation and utility applications. Their electric car will be coming out in the second half of this year which will cost two cents per mile to drive. Starting next month they will be hosting EV (electric vehicle) happy hours at their corporate headquarters to introduce themselves and help people learn how to prepare their homes for electric vehicle charging. They helped sponsor the Buy Local Expo and more information about them can be found at codaautomotive.com.

GoldSilver.com not only is located in Santa Monica but they contribute one percent of their sales to Turning Point Transitional Housing, a 55-bed shelter for homeless men and women in Santa Monica. According to their investment guide, Christian Garcia, “they have been located in the city for six years and have seen a big pick up in business since 2008” when the recession began. People purchase gold and silver coins or bars from them as a hedge against inflation.

Lastly, the Mirror spoke with Kristina Andresen. She designs costume jewelry and jewelry made from precious stones. She got started “making jewelry for non-profit silent auctions in the city.” As an architect she has designed a number of projects in the city including the Santa Monica History Museum. Further information about her can be found at AndresenAssocs@aol.com.

There was also the opportunity for shoppers to get a reusable bag from the City of Santa Monica. All they had to do was sign a pledge to use the bag and they received a bag that was made by GreenVetsLA which provides job training to local veterans. The bag was given out to help shoppers prepare for the city’s single use bag ban that will take effect on September 1, 2011.