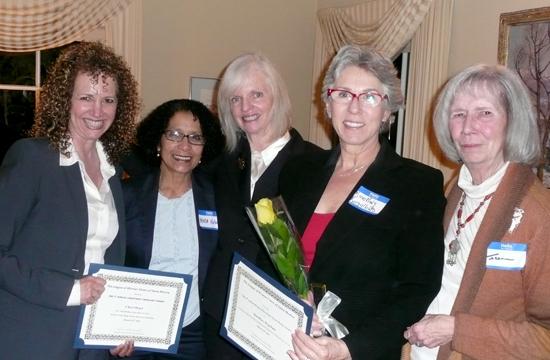 Every day Santa Monica benefits from women who are trying to make the city a better place for everyone. During the month of March some of these dedicated women were recognized at events around the city.

On March 24 the League of Women Voters, Santa Monica (LWVSM) held their annual “Women Who Shape Santa Monica” event. Marsha Moutrie, Santa Monica’s City Attorney since 1994, was recognized for understanding, believing in, and working to enforce the Brown Act and actively supporting openness in government. She heads an office of 23 attorneys who represent the City in civil cases, advise the City Council, boards, commissions and City staff, protect consumers’ and tenants’ rights, and prosecute state and local crimes on behalf of the People. Last year, the office won national recognition from the American Bar Association for outstanding service as a public law office.

Another honoree was Cheri Orgel, the education field deputy for state Assembly member Julia Brownley. LWVSM board member Barbara Inatsugu noted she lets “all parts of the community feel like they are really listened to [lets the community feel] they have Julia’s ear through her.” Orgel is also a member of a community advisory board for Santa Monica College, a real estate agent with Pence Hathorn Silver (Partners Trust), and a past president of the Santa Monica-Malibu Parent Teachers Association Council.

The President/CEO of Meals on Wheels West, RoseMary Regalbuto, was also honored. She has been with Meals on Wheels West since 1987 and has expanded their service area to include the Pacific Palisades, Malibu and Topanga as well as Santa Monica. LWVSM President Joanne Leavitt mentioned that on March 20 “she ran every cold, wet, and windy mile in the Los Angeles Marathon” to raise money to provide meals for her many clients. She also is currently a Commissioner Emeritus on Santa Monica’s Commission for the Senior Community.

Lastly, the LWVSM recognized Maria Rodriquez, a bilingual liaison with the Santa Monica-Malibu Unified School District at John Adams Middle School (JAMS). Inatsugu noted that she “always puts the best interest of our youth first – and will find ways to do that regardless of the state of our state.” She also has coordinated JAMS’s Valued Youth Program and served as president of the Santa Monica-Malibu Parent Teachers Association Council.

Santa Monica’s outgoing Director of Planning and Community Development, Eileen Fogarty, was honored at a Mid City Neighbors meeting on March 26. Mid-City President Gregg Heacock stated that she has “gone the distance on the city’s recent update of its Land Use and Circulation Element. We can’t help but admire someone who has negotiated the labyrinth of politics, procedures, various committees, and meeting with disgruntled neighborhood people.”

Fogarty commented that she hopes her “legacy is that the community and the businesses continue to find some middle ground, continue to go forward, and continue to have this kind of productive dialogue with the Council.”

Finally, State Senator Fran Pavley recognized Darlene Lasher of Pacific Palisades as her 2011 Woman of the Year for California’s 23rd Senate District. Lasher currently serves on the Board of Directors for the Ocean Park Community Center (OPCC) – a position she has held since 1994. She has also served as founder and project director for the OPCC’s Daybreak Day Center and Shelter for homeless and mentally ill women. “Ms. Lasher is someone who has dedicated her life to improving the lives of others,” said Senator Pavley in a March 23 press release. “Her tireless efforts, most recently at the Ocean Park Community Center and at the Liberty Hill Foundation, as well as at numerous other counseling and advocacy centers, have helped countless underprivileged, homeless, and mentally ill people in our community find a better future.”