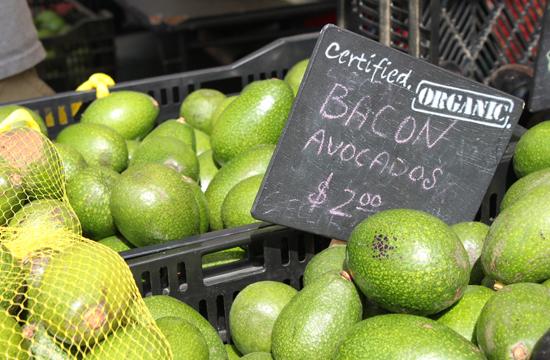 We’re in the midst of the long local avocado harvest season, and farmers are bringing their delicious avocado bounty to our farmers’ markets.

Avocados are native to Mexico and grow well in southern California. In fact, California farmers produce some 90 percent of the avocados we eat in the U.S. The Aztecs called them ahuacati, which means testicles, because of their appearance and their belief in its aphrodisiac, male-strengthening powers.

There are hundreds of varieties of avocados, but at the farmers’ markets we see mostly the smooth, thin-skinned varieties – called Fuertes, Zutanos, and Bacon – and the pebbly, thicker-skinned Pinkerton, Reed, Hass, and Lamb Hass varieties. The Hass variety is most popular because of its rich flavor, and because the thick skin does a good job of cushioning its bumpy journey from farm to table.

Avocados get their rich, buttery flavor and texture from all the oil that accumulates in their flesh. The longer an avocado stays on the tree, the more it matures and the more oil it will have. But you can’t tell an avocado’s oil content by its appearance. To ensure that farmers don’t prematurely pick their avocados before they get good and creamy, the California Avocado Commission issues an annual picking calendar of maturity release dates, which dictates the earliest picking date for each variety. Anyone who has ever eaten a watery, tasteless, immature avocado can appreciate that.

Avocados mature on the tree but they don’t ripen until they’re picked. Once mature fruit is picked, proper handling is important; if they’re stored for too long or kept too cold they won’t ripen well and their texture and flavor will disappoint. The avocados you see at the farmers’ market generally were recently picked.

The maturity release dates determine the season for each variety, but avocados grown north of Santa Monica have a later season than those grown in or near San Diego County. Winter varieties like the Bacons and Zutanos usually hit the markets first, followed by the Fuertes and Pinkertons. “Our Pinkertons are at the end of the season so they have the highest oil content right now,” said Robin Smith of Mud Creek Ranch, a certified organic farm in Santa Paula.

The Hass is harvested almost year round, while the Lamb Hass is a newer variety that is harvested in the summer. They’re bigger, fattier, and creamier than the regular Hass, said Pedro Gallardo of Pedro’s Certified Organic Avocados in Fallbrook. “When I bring Lamb Hass I sell them right away. People really like them,” said Gallardo.

Supermarkets also sell avocados imported from Mexico, Chile, and Peru, so avocados are available year round, even when they’re not in season here.

At the farmers markets you’ll usually find avocados wherever you see citrus fruits. That’s because avocados and citrus fruits both like a similar type of climate, and because citrus farmers often use avocados to diversify their crops for economic reasons. Avocados fetch a higher profit margin.

Because of their oil content, avocados are pretty high in calories – about 250 to 300 calories for a medium-sized avocado, according to the Hass Avocado Board. Some of the oil is saturated, but mostly it’s heart-healthy monounsaturated and polyunsaturated fat, and the flesh is dense with lots of vitamins, minerals, and phytonutrients, such as vitamins C, E, and K, riboflavin, folate, niacin, and lutein. In addition, avocados have more potassium than bananas.

Making guacamole is a common way to use avocados, and one way to start a contentious debate is to ask whose guacamole recipe is the best – with or without garlic or cilantro, lime or lemon, green, red or yellow onions – there are passionate camps on all sides. But avocados aren’t just for making guacamole or for slicing into salads and sandwiches. They’re widely used in other parts of the world in milkshakes, ice cream, and desserts. You can simply sprinkle salt and balsamic vinegar on a freshly cut avocado half and eat it straight out of the skin with a spoon. For something different, try a poor-man’s sashimi: a perfectly ripe Hass avocado, sliced and dipped in soy sauce and wasabi horseradish, is just about on par with the marbled tuna belly you might find at a fine sushi restaurant in Tokyo.