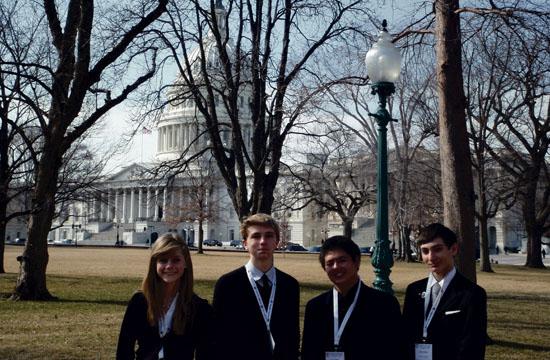 A Santa Monica High School (Samohi) delegation went to Washington D.C. last month to participate in a National Student Summit on the Ocean and Coasts that was held by Coastal America in partnership with the Smithsonian Institution.

Twenty-two delegations participated and each delegation consisted of four students. Twenty delegations were from the United States, one was from Vancouver, Canada and another was from Vera Cruz, Mexico.

“The summit is designed to teach high school students about the interconnectedness between the ocean, Great Lakes, inland seas, and climate with particular focus on climate change,” according to the summit’s website.

Alicia Archer, an education specialist for the Aquarium of the Pacific in Long Beach, told the Mirror she had been helping the four Samohi students (Kou Collins, Saundra Jay Dunbar, Aidan Richker, and Jesse Robertson) prepare for the summit since October. One of the things she helped them develop was a board game on climate change to educate the community. The goal of the game is to show the effect of climate change on humans, animals and the environment, and suggest solutions to help people lower their carbon footprint. To her, the most important thing the students took away from the experience is they “learned they could make changes in their community.”

All of the delegations helped prepare a proclamation to present to Congress. The proclamation called for an urgent need for climate change legislation and included some of the solutions the student delegations had worked on.

The Mirror also had the opportunity to speak to some of the Samohi student delegates. Dunbar described another project the Samohi students are working on at school, the conversion of a 1971 VW bug to a zero emission rechargeable electric car. Eventually, the car will be displayed at the Aquarium of the Pacific.

“The message we are trying to send to the car companies is if we can do it, why can’t you with your funding and research,” Dunbar said. She also stated that while preparing for the conference she “saw the direct effect climate change is having on my home, America.” Dunbar concluded, “The world is more delicate than people perceive. This conference motivated me to minimize my impact on the planet and inspire my community to do the same.”

The Samohi delegation “worked cohesively toward a common cause we were very passionate about,” noted Collins. By the end of the summit he really believed “one person could make a difference in the United States and the world.” Collins is hoping to study either environmental studies or environmental sciences while in college.

Lastly, the Mirror spoke with Richker. The high point of the trip for him was meeting Jack Hanna and hearing from him about how animals are affected by climate change. He also mentioned he “gained experience” he expects to use in the future and that he wants to “continue to work on the electric car project until it’s done.”

Archer also mentioned Samohi was the only high school in southern California to send a delegation and that the only other California delegation came from Monterey Bay. Samohi was selected because of the aquarium’s previous associations with the school’s marine biology teacher, Benjamin Kay. All four students will continue through June to be involved at the aquarium as interns.

Samohi’s Dean of Students, Catherine Baxter, accompanied the students as a chaperone. She found the summit to be “a powerful experience” and is very proud that the students are making “an investment to change the world.”

The Aquarium of the Pacific funded the trip for the students and Baxter.