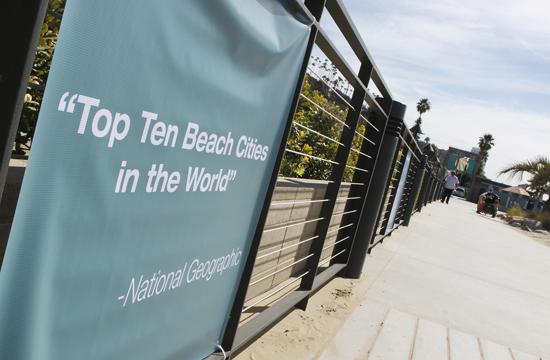 The morning after the 83rd annual Academy Awards, members of Santa Monica’s various community organizations and businesses gathered to celebrate their own awards and collectively pat themselves on the back for making the city an internationally recognized destination.

At the award-winning Annenberg Beach House along the Pacific Coast Highway, community members lauded more than 50 accolades and awards earned by the city’s hotels, restaurants, and other organizations.

“We recognize that such esteemed accolades don’t come easily,” said Santa Monica Mayor Richard Bloom. “To be distinguished as ‘the best’ by so many discerning publications and organizations is a true testament to the standard of excellence our city and our tourism community maintains.”

One of the biggest recognitions was a spot among National Geographic’s “Top 10 Beach Cities in the World,” which ranked Santa Monica up with Barcelona, Honolulu, Rio de Janeiro, and Cape Town. Other recognitions include Zagat-rated restaurants and one of Angeleno magazine’s “Top 50 Restaurants in Los Angeles,” to Travel + Leisure’s “Best Hotel for Business in Los Angeles,” and the “Best Hotel Spa” according to the readers of Condé Nast Traveler. The list of honorees and recognition spans an esteemed array of honors for sustainable practices and designs, innovative programs, list-topping cuisine and chefs, and a host of “best of” recognition. One recognition especially celebrated is Santa Monica having the best Farmers’ Market in America by Travel and Leisure Magazine.

“Individually, these awards are press worthy, but you put them all together and it is a great opportunity for us, as a city, to tout the beach city experience that we offer here, said Bill Doak, the Santa Monica Convention and Visitors Bureau’s (SMCVB) chairman and general manager of Loews Santa Monica Beach Hotel. “Santa Monica offers an abundance of options for virtually anyone visiting here. Health and fitness travelers can find a wealth of active, outdoor activities and fantastic spas, while foodies love that they can enjoy creative, specialty cuisine by top chefs, with fresh ingredients directly from our local farms.”

In addition to private organizations, local government entities had their fair share of recognition this last year. One of the biggest came from the City’s adoption of its Land Use and Circulation Element (LUCE) after an arduous six-year process.

“Our (LUCE) garnered a whole lot of awards this year, for excellence in planning from the Santa Monica Conservancy… some of these awards were even given before it was adopted, so it is considered to be one the most cutting edge land use documents in the country at this time,” said City Manager Rod Gould. “Congratulations to our planning and other departments.”

At the event, the SMCVB also unveiled a newly adopted promotional tagline “Santa Monica: California’s Most Celebrated Beach City” as its commemorative slogan.

“We’re very proud to celebrate these establishments and all they contribute to our local community,” said Misti Kerns, president of SMCVB. “We’re looking forward to highlighting them throughout 2011 and we encourage our City departments and our local businesses and organizations to do the same.”