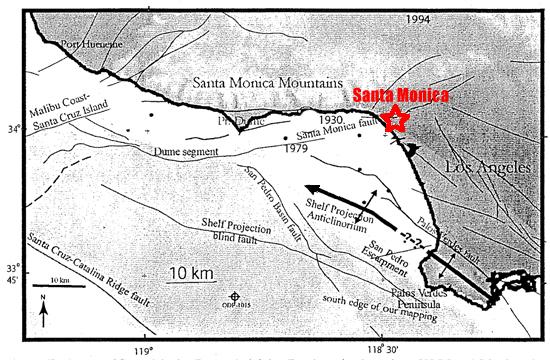 In the Hollywood culture of the U.S. – and even more prominent in Southern California – disaster movies can make the real possibility of a catastrophic natural disaster seem like an absurd abstraction. But video feeds of the 9.0 earthquake and ensuing tsunami and nuclear disaster in Japan have given cause for reflection on the very real possibility of a similar California catastrophe.

While Santa Monica prides itself as being a beautiful coastal town, things could turn ugly real quick should a major earthquake strike the Los Angeles basin – especially if the earthquake occurs near or off the shoreline, therefore increasing the risks of a tsunami. Furthermore, with a nuclear power plant just a couple of hours south in San Onofre, it is realistically possible Santa Monicans and Southern Californians alike could face a disaster similar to that of what just happened in northeast Japan.

Accordingly, City officials and first responders urge residents to take all steps to be prepared as best as possible should an earthquake, tsunami, nuclear disaster, or similar event occur in Santa Monica and the surrounding region.

“There is much more that we can do in Santa Monica to prepare ourselves for a regional disaster,” City Manager Rod Gould told the Mirror. “In Santa Monica, it’s pretty easy to say that the number-one risk is major earthquake, that’s not a surprise. The number-two threat is probably … tsunami. That becomes more credible after the effects of the other day (in Japan).”

In terms of what local residents can do on a basic level, at the very least people should have a preparedness kit to provide supplies for car, home, and work, including medication for infants, children, and pets, said Paul Weinberg, the emergency services coordinator of the City’s Fire Department.

Additionally, Weinberg recommended creating and sticking to a disaster plan of how to be in contact with concerned ones. For example, families should establish a meeting place plan or predefined reunification site in the event emergency strikes during business and school hours and everyone may be separated from each other.

Also, Weinberg suggested sending text messages to concerned individuals post-disaster, especially if the contact is out of state, as opposed to establishing a phone connection.

Both Gould and Weinberg stressed the first responders and key government entities would likely be short staffed and may not be able to respond quickly to everyone’s needs or emergencies in a timely manner.

Even before the Japan earthquake, Gould planned to approach the City Council about doing what it can to ensure Santa Monica is as prepared as possible should an event remotely similar occur in the City and surrounding areas.

“What I am worried about… and what I will be talking to Council at budget time about is strengthening our ability to deal with a regional disaster,” Gould said. “This is an event that is so large, that it removes the possibility of outside help for up to 72 hours. The disaster is such that all available resources in the region are used and you are forced to rely on the people you have on staff right at that moment, and your townspeople who have been properly trained.”

He added, while it is impossible to fully prepare for a major catastrophe of any sort, considering as many options as possible is a worthy exercise.

“We need to begin to tune up for the major events and scenarios that we see as possible, whether it’s earthquake, flooding from a tsunami, whether it’s a major hazmat spill, whether it’s a manmade disaster of some sort,” Gould said. “We’ve got to work through those scenarios and figure out what we would do.”

Gould also said Southern California has made progress since 1994, when the Northridge earthquake rattled Santa Monica and the entire region. However, in the face of such progress, Gould said avoiding complacency is key.

“The building codes are much improved. We’ve improved the emergency communications systems. Protocols are better than what we had in 1994. That said I still believe there is much more that we need to be doing in Santa Monica,” he said. “Too much of our emergency preparedness in Santa Monica is localized in the fire department. We need to expand it to all of the departments.”

Weinstein echoed similar sentiments, telling the Mirror while the city of Los Angeles and other nearby locales would normally contribute its emergency services during a localized event, a major earthquake would significantly alter and delay outside support.

“We can assume in a major earthquake in the L.A. region, L.A. Fire is going to be busy with their own commitments, and we’re going to have to make due with the resources that we have here,” he said.

Gould said there is ultimately no way to be perfectly prepared for such an epic catastrophe as Japan has endured.

“There is no city in the world that is prepared for a catastrophe of the level of what is happening in Japan this past week,” Gould said. “What happened in Japan is so extreme. You can pretend that you have enough people, that you’ve drilled enough, have the right equipment, have the right communication protocols, and so forth, but something that big you cannot prepare for.”