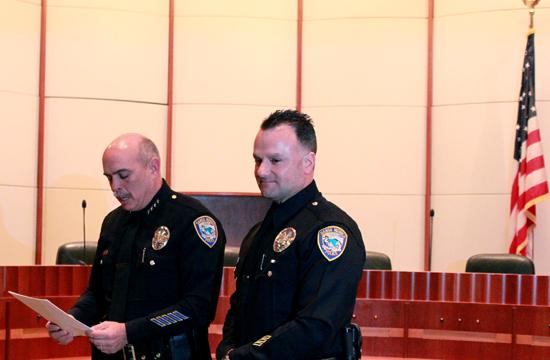 Residents near the intersection of Lincoln and Pico Boulevards likely recall either the sound of gunfire in the hours before sunrise on May 18, 2010, or the ensuing four-hour police search for the shooter aided by a hovering helicopter.

After four hours of eight assisting law enforcement agencies, a second gun fight led to the arrest of a man who had non-fatally shot a Santa Monica police officer during a routine traffic stop that morning. In the following days, the shooter’s name was released, but the identity of the shot officer was not.

This week, Officer Benito Seli was honored before a packed City Council chamber at Santa Monica City Hall on March 21, receiving the Line of Duty Medal and the Medal of Valor for his actions and injuries on that dark morning nearly a year ago.

It all began that mid-May morning when Santa Monica Police Officer Kevin McInerney observed a black, late-model Nissan Pathfinder driving “erratically” northbound with its lights off, and pulled the vehicle over on the east side of Lincoln Boulevard just past Bay Street.

Sgt. Roberto Hernandez Jr. arrived to assist McInerney, followed shortly by Seli. As McInerney began to administer a field sobriety test on the driver of the vehicle, Seli approached the passenger side door to check on the second occupant. However before he got there, the door was flung open and 32-year-old Dante Glenn Leverette assumed a crouching position, and began firing a semi automatic handgun at the officers, striking Seli in his right hip. All three officers returned fire; while Seli ducked behind the suspect’s vehicle and McInerney kept the driver under vigilant control.

After exchanged gunfire, Leverette fled north toward Pico Boulevard. As Hernandez ran after the shooter, he heard Seli say he had been shot. When Hernandez reached the corner of Pico and Lincoln Boulevards, he lost sight of the suspect and returned to help his downed fellow officer. Despite being shot, Seli broadcast a “Shots Fired” call, along with a suspect description, and direction of travel to dispatch.

He “was bleeding profusely” from the wound in his right hip, where the bullet had just missed the femoral artery. Daniel Gomez and Richard Bitting were nearby in a Gerber Ambulance. They saw the police lights, and stopped to administer care – despite knowing that the armed suspect was still at large in the area.

At approximately 5:10 a.m., SMPD officers located the suspect “hunkered down” in the alley parallel to where the initial traffic stop occurred. Reports indicate that officers shot Leverette because he confronted them and the K-9 units. Leverette was taken to a local hospital for non-life threatening injuries from the K-9 contact and wounds received from the gunshots.

The driver of the vehicle from which Leverette lept was a 46-year-old Ohio man, who was taken into custody after the initial incident but was later released as an “uninvolved party” with no charges filed. He was described as “cooperative” throughout the entire incident.

Along with presenting Seli with his medals at Monday’s award ceremony, Chief Jackman also recognized and rewarded the valor of the others involved that morning in May 2010. Officer McInerney was presented with the Medal of Merit; Sgt. Hernandez was given the Medal of Courage; Officer Phillip DeRyck, who arrived and helped tend to Seli’s wounds, was given the Lifesaving Medal; and the ambulance drivers, Gomez and Bitting, were each given Citizen Involvement Awards.

Also at the morning ceremonies, David Hunscke was deservingly promoted to Lieutenant.