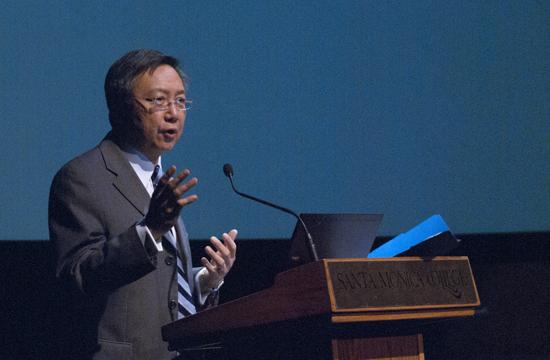 For the past two years Santa Monica College has been able to maintain most of its services, class offerings, and employee benefits despite the ongoing state budget crisis. However, the outlook for 2011-2012 fiscal year is much more dire as Gov. Jerry Brown’s proposed budget calls for at least a $400 million reduction in community college funding and the need for a majority voter approval of tax extensions to help close the state’s $26.4 billion budget shortfall.

“It’s really important to me, the college’s Board of Trustees, and the college, that we do into this stormy condition that we’re facing as a group. This is the way a family would deal with a budget crisis,” said Chui Tsang, the school’s superintendent and president, to the packed auditorium at the Humanities and Social Science Lecture Hall.

Robert Isomoto, SMC’s vice president of business and administration, gave a presentation of the three most likely budget scenarios the school will face based on the current state budget variables. If tax extensions are placed on the June ballot, and the voters approve them, SMC would face a $5.6 million deficit, which would result in a projected loss of 1,243 full time equivalent positions (FTES) and a projected loss of 2,585 students.

In addition to the possible loss of state funding from any of the three scenarios the college is also facing a $5.7 operating deficit. Therefore, this sum must also be added to the loss projected for each of these possible scenarios.

Isomoto also mentioned that 88 percent of the college’s costs result from salaries and benefits.

Thus far, SMC has implemented a hiring freeze on all but essential personnel, has made a change in health coverage for managers for this fiscal year, and has been able to charge more for nonresident tuition. In addition, on March 1, the SMC Board of Trustees adopted two objectives and fifteen principles to guide the college in how to make the necessary budget cuts over the next few months. A key principle highlighted by Isomoto was to try to “avoid layoffs of permanent employees. Seek salary freezes, furloughs, salary reductions, and other temporary or ongoing adjustments.”

College officials are also monitoring the state situation closely and advocating for voter approval of the tax extensions if they are placed on the June ballot. They believe the budget problems will continue for the next couple of years.

The superintendent also responded to questions from the community. When asked how the cuts would affect the Emeritus College, which offers free classes for those 50 years old and older, he noted that the Legislative Analyst Office has already issued suggested actions for the reduction of courses that could impact Emeritus offerings. These course guidelines included “eliminating all activity courses, physical education programs, athletic programs, some of the dance performance programs … and eliminating all repetition of courses.” The college is looking at ways to avoid cutting these types of Emeritus classes by asking the City of Santa Monica for financial help and possibly charging fees for these classes.

There was also a question on how the college would deal with F1 visa students who need to be taking at least 12 units to maintain their visa. Tsang said the college “will make sure they get the units they need.” He also mentioned that the college is looking into creating an extension program to help address the reductions they will have to make in class offerings that would impact all students.

Some in the audience were concerned if summer school would be offered. The superintendent responded that the college is “planning for a scaled down summer school” which would be made possible because of the college’s reserve fund. He emphasized the importance of keeping a 7.5 percent reserve because the college’s financial position is so precarious right now.

Lastly, in response to a number of similar questions Tsang stressed that all cuts would be equitable, would not hit any employee group more than another, and would be the result of collective bargaining based on the Board of Trustees approved objectives and principles.

The Mirror spoke with Mitra Moassessi, the president of the SMC faculty association prior to the town hall. She emphasized that at this time there are “just assumptions – none of them are real. We don’t know what will happen.” She also mentioned that items such as salary and benefits are “all items that are negotiable.” Therefore, “we will not agree to any cut because at this point there are only assumptions.” Her association is currently in the process of negotiating a three-year contract with the college for 2010-2013 and is “still functioning under their previous contract.”

Moassessi also noted that her association has presented a list of 20-30 items to the college’s budget committee that could be cut without affecting the students’ education or the college’s employees’ salaries or benefits. Cuts suggested include the areas of advertising, marketing, and legal fees.

“If the college is cutting classes, why advertise [they] if don’t have enough classes?” Moassessi rhetorically asked as a way to explain her organization’s suggestion to make cuts in advertising and marketing.