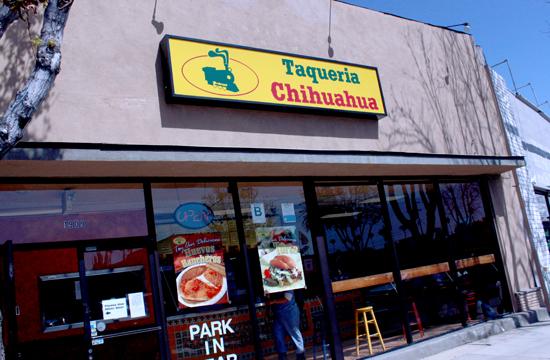 Loyal followers of Taqueria Chihuahua, a beloved Mexican restaurant at the southeast corner of Lincoln and Pico boulevards, may be on the move again if proposed plans to open a Walgreens drugstore at the location are confirmed.

It wouldn’t be the first time the restaurant has relocated. Its original location was on Olympic Boulevard near 20th Street, where it opened in 1974. Back then, it was called Lucy’s. To avoid confusion with the other Lucy’s Mexican restaurants at the time, it was renamed Taqueria Chihuahua, after the state of Chihuahua in northwestern Mexico, homeland of then-owner Primitivo Banda.

The restaurant’s logo, a locomotive train, is a nod to the Copper Canyon train that takes tourists through the Sierra Mountains of Mexico, said Mario Banda, who took over the business from his father in August 1993. The logo was designed by his brother and was inspired by a trip the brothers took on the train with their father.

When the lease at the Olympic Boulevard location expired and the property was sold, the restaurant moved in September 2007 to its current location on Lincoln Boulevard, just south of the Pico intersection.

“It feels good to have loyal clientele who followed us to our location here,” Banda said. “Our staff tries very hard to be friendly, and there are people we’ve known for many years.”

When asked to comment on the prospect of moving his restaurant again, Banda replied, “It would be difficult to have to relocate again, but it looks like big business is probably going to win. I hope to stay in Santa Monica because we’ve been here for so many years.”

With only four tables and a counter with a few stools this popular taqueria draws an eclectic crowd of residents and workers from the neighborhood and beyond, including Santa Monica police officers and students from nearby Santa Monica High School. They come for the good food at easy prices, the friendly service, and ambiance.

Once customers place an order, they can watch it being prepared fresh in the kitchen through a big display window. They can then stop at the salsa bar stocked with radish slices, lime wedges, and three kinds of salsa: tomatillo, red hot, and salsa fresca. Take in the view of the crowd and busy Lincoln Boulevard while dining on paper plates and plastic trays, or get an order packed to go. Call ahead if you’re in a hurry during peak lunchtime hours.

Santa Monica College Police officers Ruben Cadena and Michael Champagne recently stopped by at lunchtime for burritos. “I come here a few times a month,” said officer Champagne. “It’s a quick place to eat, you can get good food fast. I like the Colorado burrito; it’s really good.” Officer Cadena said he likes the al pastor burrito. “The food here is probably more authentic, closer to what I’m used to. It’s not gourmet-style Mexican food; it’s more authentic. It’s got a nice atmosphere,” he said.

Eddie Garcia stops by two or three times a week not only for the good food, reasonable prices, and Mexican music and ambiance, but because he likes the friendly service. “It’s the service that makes me come back; the employees here,” he said. “They call me by my name, and I feel welcome. They know me, it’s more like a friendship.”

Pete Mortensen became a customer at the Olympic Boulevard location and now comes to the current location for lunch, dinner, and sometimes breakfast. “I like the food and I like the people who work here,” he said. “I get the potato tacos, the carne asada, the chorizo. The food here tastes more homemade than other places.”

Hank Ostendorf, an actor, stayed away from Mexican food while preparing for the L.A. marathon, but “now I’m back,” he said last week. He likes the carne asada and al pastor, and on this visit he was trying the shrimp burrito. “I like the people, the quality of food is better, and I’ve gotten to know the people who work here – Esteban, Mario – they do their best. It’s the Chihuahua! It’s cool,” he said. “[If the restaurant were to be displaced by a new Walgreens] I think it’d be a real shame, I would absolutely miss the Chihuahua.”

Walter Paez, Art Rojas, and Israel Diaz work in the neighborhood and meet here for lunch once a week. Paez and Rojas get the carne asada burrito, but Diaz, of Palisades Auto Service on Lincoln Boulevard, prefers the cabeza burrito. “It’s part of the cow’s head. It’s one of my favorites,” he said. If the restaurant relocates, the trio said they would continue to meet for lunch at Taqueria Chihuahua. “Even if we have to drive, we will follow them to get good food,” Paez said.