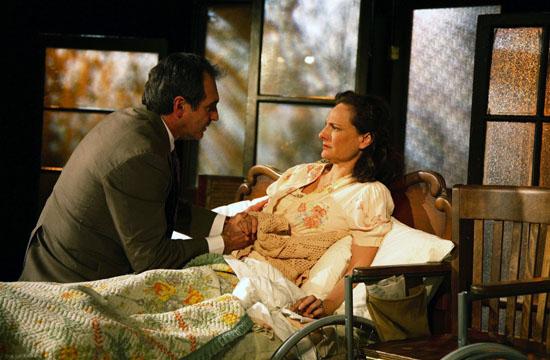 In these times of social networking, Twitter, fast food, sitcoms that toss commercials in your face every fifteen minutes, and an expectation of instant gratification where we are instructed to “cut to the chase,” Arthur Miller’s searing, perhaps metaphorical drama requires patience as this most esteemed playwright takes his time in unfolding his rather complex story. Miller is, after all, a quintessential storyteller who takes his time delving deeply into the unconscious of his characters to subtly reveal motivations for their behavior.

The story begins in Brooklyn in 1938. Hitler has invaded Austria and the infamous “Kristallnacht” – the night of broken glass – took place and the world became aware of the violence being committed against the Jews. Sylvia Gellburg, beautifully played by Susan Angelo, has mysteriously lost the use of her legs after reading about the atrocities taking place in Europe. She was particularly moved by the story about old Jewish men with beards being forced to scrub sidewalks with a toothbrush while onlookers laughed and jeered.

Her button down, uptight husband Phillip, magnificently played by Michael Bofshever, shows indifference to the political situation in Germany and discourages his wife from reading the newspapers which she devours daily. He is somewhat concerned that Hitler’s behavior might encourage an outbreak of anti-Semitism in America.

Phillip is at a loss to understand her physical illness, since all her tests are negative, and seeks advice from Dr. Harry Hyman, strongly played by Stephen Burleigh, who endows his character with just the right amount of sympathy and determination to uncover the reason for Sylvia’s “hysterical paralysis,” which today would be diagnosed as a psychosomatic disorder. Her devoted sister Harriet, well played by Renae Geerlings, reveals some uncomfortable truths about Phillip’s past treatment of Sylvia, shedding light on her sister’s possible suppressed feelings.

Philip might be described as an anti-Semitic Jew who desperately wants to assimilate into the Gentile world. He has tried to distance himself from the Jewish community and is, indeed, the only Jewish executive at the Brooklyn Guarantee and Trust Company, heading the mortgage department. His quintessential Gentile boss, Stanton Case, is played with just the right amount of “Waspy” reserve by Lindsey Ginter, who we meet for the first time with him wearing sailing clothes. He actually helped Phillip get his son into West Point, a rarity indeed. However, his faith in Phillip gets shaken after a deal falls through at the hands of another Jew. Was any collusion involved?

As the play progresses, we see Phillip slowly unravel from being almost a mean-spirited, dictatorial husband to a wreck of a man who has been plagued by impotence and guilt for 20 years. He is at the same time concerned about his wife’s condition and furious, accusing her of getting back at him for making her give up her career as a bookkeeper and being in a loveless marriage. Bofshever’s highly-textured, multi-layered, deeply emotional performance is almost a tour-de-force and is matched equally by Angelo’s conflicted Sylvia who constantly apologizes for her condition. The question remains: Is she secretly enjoying her malady in some perverse way?

Miller weaves a tapestry of complex relationships. All is not wonderful on the home front with Dr. Hyman and his seemingly cheerful wife Margaret, played by Peggy Dunne, who slowly reveals the layers of emotions lurking below her happy exterior. He has had affairs in the past and she is suspicious that he is falling in love with Sylvia. Is he? Is Sylvia falling in love with him? With all the characters, the surface behavior is a mask for the troubles buried under social appearances.

As Miller takes us through the action, Phillip, who in the beginning is the least likeable of the people living in his world, becomes the most tragic figure of all and it isn’t until he suffers a heart attack that there is a transition in Sylvia’s malady. His words “I can’t find myself in this life” spoken earlier, are particularly poignant as the play comes to a close.