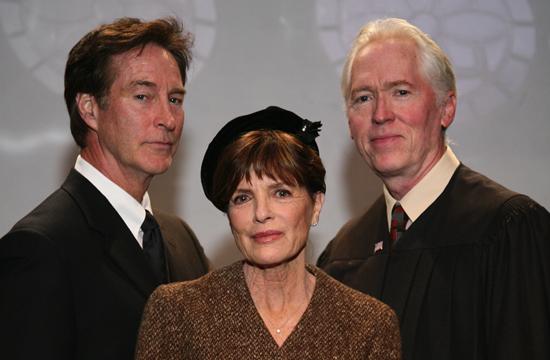 Under the direction of Stanley Kramer, Abby Mann’s compelling screenplay “Judgment at Nuremberg,” released in 1961, won an Academy Award, as well as the Best Actor award to Maximilian Schell for his role as Hans Rolfe. There was an assortment of additional nominations, both for acting and technical achievements.

“Judgment at Nuremberg,” takes place three years after the most important Nazi leaders had already been tried and convicted and centers around a military tribunal in which four judges are accused of crimes against humanity for their actions as members of the Ministry of Justice during the Nazi regime, which advocated Best Adapted Screenplay sterilization and cleansing policies. Their crimes were committed in the name of the law, or what passed for justice during the Nazi regime.

This is an extremely demanding play to pull off, but under the direction of Diane Namm, a viable, if not perfect revival, is currently on stage at the Santa Monica Playhouse.

Namm has assembled a competent cast, some of whom give outstanding performances. Particularly compelling is Drake Hogestyn’s interpretation of Dr. Ernst Janning who was head of the Ministry of Justice. With very little dialogue in Act 1, Hogestyn’s physical characterization of a proud, superior man, coupled with strong reactive silences to the proceedings, is an example of an actor needing little to no dialogue to render a splendid performance. The change in his character in Act II becomes particularly powerful as he begins to take responsibility for his actions (in this production, there are only two judges on trial instead of the four).

Other noteworthy performances came from D. Kevin Kelly as the prosecuting attorney Colonel Parker who is hell bent on seeking justice for those killed under the Nazi regime. Kelly possesses a strong theatrical presence, as does Michael Merton who plays the other judge on trial, Emil Hahn, whose belief in his actions is unwavering. Jodi Skeris who plays Elsa Lindnow, is one of the few actors who gets to the subtext by both defending Hitler saying “he did some good,” and asserting that she didn’t know about the camps and, “Even if I did, what could I do about it,” contradicting her feigned ignorance.

Barry Saltzman’s character of Rudolph Peterson, who was sterilized for being “feeble minded” as a result of Janning’s ruling, is well developed and emotionally layered, playing the subtext as well as the lines.

Other members of the ensemble include Andy Hirsch as the defense attorney Oskar Rolfe; Lydia Muijen who gives an excellent, multi-textured, emotional performance as Maria Wallner convicted for “lying” about a relationship with a Jewish man who was just her friend; and Ian Patrick Williams, whose Southern accent seemed appropriate as Judge Haywood. Rounding out the cast is Lisa Temple as Judge Norris, Rafael J. Noble as Judge Ives, Betsy Baker as Mrs. Halberstadt, and Holger Moncada as Captain Byers. Katharine Ross took on the Marlene Dietrich role of Frau Bertholt. She has one particularly interesting scene with Judge Haywood in which she tries to defend her executed husband’s actions, denying that he knew about the mass exterminations.

A major flaw in this production is the total lack of a Germanic sound as all the actors spoke with American accents. This is a slippery slope as sometimes there’s nothing worse than Americans doing accents but a flavor, even one or two words, would have helped in establishing some authenticity and separation of the two sides.

Technically, Tanna Roller’s courtroom set design served the production well, as did Rosalie Alvarez’s period costumes, and R. Christopher’s Stokes’ lighting design. The use of historic newsreels helped establish the setting but Mike Shear’s sound design was confusing and seemed out of sync with that particular era.

Producing a play with a large cast in the Equity Waiver system is challenging but Namm has met the challenge and has produced a play that is certainly worth seeing, if for nothing else but to remind us that we must never forget what happened and that we must question government orders that fly in the face of what we hold to be moral and ethical.