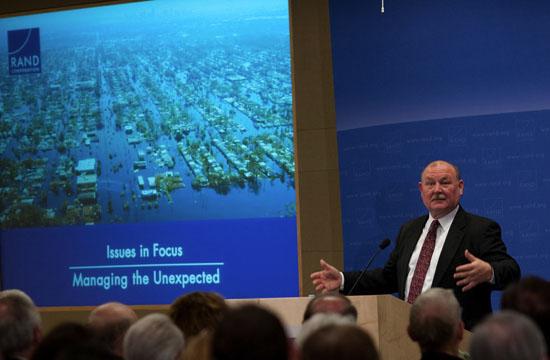 Managing an effective response to disasters is key to saving lives and preserving resources. No one is more aware of this than Admiral Thad Allen who discussed how he has helped manage the federal government’s response to Hurricane Katrina in 2005, the British Petroleum oil spill in the Gulf in 2010, and other disasters at a RAND Corporation’s “Issues in Focus: Managing the Unexpected.”

“I fear there’s a growing gap between the expectations of what the public expects from their government and what they see the government produce when a disaster occurs,” stated Allen on April 19. I’ve tried to create a framework to understand crisis and create the overarching goal of “unity of effort.” Unity of effort can be improved by raising leaders in the United States than can work across boundaries and that know how to network and collaborate.

Allen described the problems with the federal government’s response to Hurricane Katrina by stating, “as I flew into New Orleans on the morning of the 6 of September (2005) at that point eight days after the hurricane came ashore and I realized that as a nation we had gotten something wrong. What we got wrong was our ability to define what the problem was, establish the objectives, and create an effective response.” There was a failure to understand we weren’t dealing with a hurricane anymore because the breach of the levies caused New Orleans to flood. Forces were flowing into New Orleans but there was no joint effort. I worked to create a paradigm to help the mayor when he lost the ability to deal with the crisis because there was no basis to preempt the local government. “What we did was provide security access, logistics, and support for the police officers that went door to door.”

The federal response to the British Petroleum oil spill in the Gulf of Mexico was different because federal legislation mandates that the local response be preempted by federal government. In this case, the leaking well was located 45 miles offshore and oil was threatening five states. Allen stated, “what we needed to do was focus on containing the well, capping the well, killing the well, and we needed to focus on the oil coming to the surface. It was the most political event I’ve ever been involved in because of the political cognitive dissidence between what local leaders perceived as their role and the managerial response. Political leaders thought they should be given local resources to deal with the spill in their area. Today, they are still upset with the federal government and me. The only way to run this was by a unified federal effort.”

Allen also believes that there will never be another disaster that doesn’t involve the participation of the 24/7 news cycle, non-government organizations, faith-based organizations, and citizen volunteers. He stressed that there are ways to involve theses organizations and people through an appropriate structure. However, it is important to minimize the use of spontaneous unaffiliated volunteers.

Allen served in the U.S. Coast Guard for 39 years before his retirement in June 2010. He is now a senior fellow with the RAND Corporation and is still involved with the federal response British Petroleum oil spill.