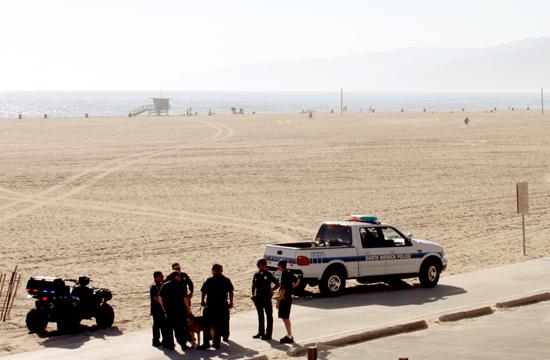 It appears that tsunamis aren’t the only dangers that can come ashore on Santa Monica Beach. Two explosive objects were found on the beach just north of the Santa Monica Pier Friday afternoon that prompted lifeguards to call in police, who evacuated the immediate area of civilians at around 3 p.m. on April 15.

One of the objects appeared to be a military explosive device used for training and was determined by Los Angeles County Sheriff’s Department’s bomb squad officials to be possibly explosive. The other was some sort of gas bursting object, such as tear gas or smoke bomb. Both objects were taken by the bomb squad to be safely detonated.

One of the objects was found close to shore, the other was found deeper inland, about half-way between the shore and the Pacific Coast Highway. Santa Monica Police officers, who cleared civilians of the area and swept for addition devices, said the object found further inland may have been carried by someone until they dropped it. The objects were reported by beach goers to the lifeguards.

After the devices were removed and the authorities concluded their sweep for addition devices and determined the area to be safe, the beach was reopened in time for people to enjoy what was left of the afternoon sun and heat.