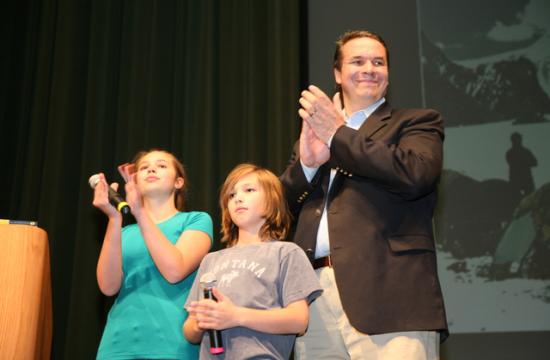 Greg Mortensen, the founder of Pennies For Peace and the author of two best sellers, “Three Cups of Tea” and “Stones into School,” has been accused of falsifying some of the significant episodes that appeared in his books and mishandling funds for his charitable organization, Central Asia Institute.

Mortensen spoke about his innovative approach of building peace by expanding educational opportunities to children, especially girls, of the remote mountain regions of Pakistan and Afghanistan at Santa Monica High School (Samohi) in February 2009. He believes education is a way to give hope to the children of Central Asia so they will have alternatives to the cycle of terrorism and war. The Samohi program also included the presentation of checks to Mortensen by children from the Santa Monica-Malibu Unified School District, other nearby districts, and area private schools for the pennies their schools had collected as part of their January “Pennies for Peace” campaign. After the program ended Mortensen held a book signing. Those who attended also had to buy a ticket. Proceeds from those sales also went to Pennies For Peace.

In “Three Cups of Tea,” Mortensen describes how he became lost and disoriented after a failed climb up the K2 Mountain in the Himalayas in 1993. He then wandered into a remote village in Korphe, Pakistan and the villagers saved his life. When he learned their village had no school, he promised that he would come back to build one. In order to fulfill his promise, Mortenson founded the Central Asia Institute (CAI) in 1993, and Pennies For Peace became one of its fundraising programs. Pennies For Peace also collects donations from individuals and organizations, and has 32 countries participating in its fundraising activities.

The CBS program “60 Minutes” began to investigate Mortensen last fall after receiving complaints from former members of the CAI board of directors, former donors, and charity watchdog groups about how CAI was being run and questioning facts in Mortensen’s books. The 60 Minutes piece aired on April 17.

Jon Krakauer, a mountain climber, author of “Into Thin Air,” and early donor to CAI, told 60 Minutes “reporter Steve Kroft that the story about Korphe is a beautiful story and it’s a lie. ”

“I withdrew support over concerns that the charity was mismanaged,” Krakauer said. “In 2002 the CAI board’s treasurer quit and told me Greg uses CAI as his private ATM machine.”

“He doesn’t know how many schools he’s built or what the schools’ costs are. He’s helped thousands of school kids in Afghanistan and Pakistan. He has become the world’s most effective spokesperson for girls’ education in developing countries and he deserves credit for that,” Krakauer told “60 Minutes.” “Nevertheless he is threatening to bring it all down … by this fraud and lies.”

An article posted on CNN.com on April 18 by Peter Bergen states that in “Three Cups of Tea…” (Mortensen) says he was captured by the Taliban and held for several days before being released in 1996. In the sequel, ‘Stones into Schools,’ he even provides a photo of his kidnappers,” which Bergen said includes a man named Mansur Khan Mahsud, who directs a Pakistani think tank. Mahsud told CNN that Mortensen was not kidnapped and that his account “is a pack of lies.” Mahsud claims Mortensen visited Pakistan in 1996 as a guest of his family, therefore he plans to sue the author-philanthropist for defamation of himself, his family, and his tribe.

“60 Minutes” also tried to verify facts about the kidnapping story by speaking with four of the 14 people that were in the picture included in Mortensen’s second book. They also disputed what Mortensen wrote in his book. Kroft stated in his report that “upon close examination some of the most touching and harrowing tales in Mortensen’s books appear either to be greatly exaggerated or made up.”

Kroft also interviewed the President of the American Institute of Philanthropy, Daniel Borochoff, who noted that the one financial statement issued since CAI began 14 years ago shows “a lack of transparency and a troublesome intermingling of Mortensen’s personal business interests with the charity’s public purpose. He spends more money domestically promoting the importance of building schools in Afghanistan and Pakistan than actually constructing and funding them oversees.”

A significant amount of CAI’s money is also spent on advertising and travel expenses for Mortensen’s to promote his books, even though the charity gets no money from the book sales or Mortensen’s speaking engagements, which many times pay him up to $30,000 per engagement. CAI’s current board told “60 Minutes” that Mortensen’s books and speaking engagements are an integral part of its mission because they help raise public awareness and generate contributions. In addition, the board claims Mortensen has contributed hundreds of thousands of dollars from his book royalties and speaking fees to CAI.

“60 Minutes” also looked into 30 of the 141 schools CAI’s 2009 tax return claimed they either built or supported. Half of the 30 schools were empty or built by someone else, some that once received support no longer do, and some empty schools were being used to store spinach and hay.

Mortensen declined to be interviewed by “60 Minutes,” but in written statements to them, and on the CAI website, Mortensen defends his books and the values of CAI. “The board of directors and I made the very difficult decision to not engage with ‘60 Minutes’ on camera…” said Mortensen in a statement, where he went on to complain about the manner in which the reporters approached him for comment. “It was clear that the program’s disrespectful approach would not result in a fair, balanced or objective representation of our work, my books or our vital mission.”

Mortensen also said, “I welcome and am used to facing criticism, which sometimes even turns into hostility and threats, over the important work we do in Pakistan and Afghanistan… But, as those of you who know me and have supported my work over the years will recognize, the story being framed by ‘60 Minutes’ …paints a distorted picture using inaccurate information.”

“Three Cups of Tea” is available as a regular book and as a picture book “Listen to the Wind,” intended for younger children. The title for the book was chosen, explained Mortenson at Samohi in 2009, because in Pakistan the first cup of tea you have with someone is as a stranger, the second cup is as a friend, and the third cup is as family. The book has sold more than 4 million copies worldwide and is now required reading for all members of the U.S. military who serve in Afghanistan.

Shari Davis, the President of the Santa Monica-Malibu Unified School District’s PTA Council, told the Mirror, “If the allegations are true it would be terrible for the children and other individuals who were for Pennies For Peace.”

Attempts by the Mirror to reach other parent leaders or district officials were unsuccessful at press time because the district is on spring break.