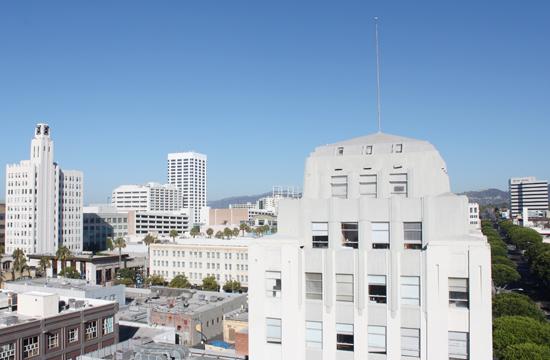 The Santa Monica City Council extensively discussed improving traffic circulation in the downtown and civic center areas at its April 15 meeting at City Hall, as the elected board brainstormed for about two hours on how best to move forward with its plans to better traffic flow in some of the most congested areas in the city.

One issue extensively hashed out was design improvements to automobile, bicycle, and foot circulation within the city in light of the anticipated arrival of the Exposition Light Rail Line (Expo) and the Land Use and Circulation Element (LUCE).

“The success of the Downtown and Civic Center relies on the strength and connectivity of pedestrian, vehicle, bicycle, and transit networks,” Planning Director Eileen Fogarty stated in the staff report.

“We felt it was important to lay out how all of this ties together,” she added during her presentation to the council.

In that vein, one Santa Monica resident hoped the council would come to terms about a substantial bicycle plan promoting increased usage of the two-wheeled non-motorized vehicles sooner – rather than later.

“I’d like to be able to … bicycle in Santa Monica and not drive out of Santa Monica to spend my money. In order for me to do that, I have to be able to see integrated steps to make (biking) safer,” resident Dee Capelli said, pushing for additional bike lanes, improved signage, and driver and cyclist education. “Seeing police on bikes says, to me … bicycles are a welcome presence and an important part of the city.”

Council member Bobby Shriver was concerned about cost. While certain financial figures were mentioned throughout the staff report and the amount of $20 million was mentioned during the back-and-forth between the council and staff, Shriver opined that a study session discussion on this or any issues would be incomplete and potentially a waste of time without a cohesive summary of planned expenditures.

“The first thing we have to see is the price. It’s not presented in a form that is easily accessible,” Shriver said. “I understand this is an ideation process, (but) you can’t have an ideation process without the cost. Do we have the money to cap the freeway? The answer is, we all know, is no. Why are we having a discussion about capping the freeway?”

City Manager Rod Gould replied the circulation issue was merely brought up as a discussion item in an attempt to determine how to best provide a budget for whatever course of action the Council would ultimately take, and the next time this issue would be brought to the elected board would probably be inclusive of financial forecasts.

Just the same, Mayor Richard Bloom said the circulation issues discussed during the study session are key to improving the downtown area as a whole.

“We clearly have limited resources, that is why we are prioritizing (but) … (o)verall, I think this is just an excellent plan. Going forward on both the short term and … long term recommendations is truly going to transform our downtown in great ways,” Bloom stated.

Fogarty added that the area between downtown and civic center may negatively affect circulation due to lack of significant activity in that small space.

“We will not get the kind of return on investment from the … public and private (capital) projects if we can’t connect them. We will have unnecessary traffic if we have created other ways for people to get between the two areas,” she said.

The April 12 study session was spawned from an effort to better enhance traffic efficiency in downtown, and nearly two years of discussions concerning circulation, the development and arrival of Expo, and the anticipated increase in bicycle and pedestrian traffic by 2015.

Projects to be directly affected by the council’s study session include the Colorado Esplanade, bicycle improvements, and a network gap-filler project that would strengthen a “critical pedestrian and vehicle connection near the I-10 freeway.”

Council member Kevin McKeown was not present at the April 12 meeting.