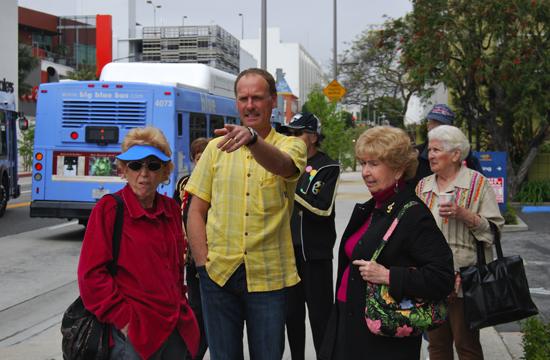 Your mother always told you to look both ways before crossing the street. The City of Santa Monica hopes you will return the favor and remind your aging mother (or aging father) of the same when they become senior citizens.

Of course, the City is willing to do its part to ensure aging adults are as protected in their golden years as they were in their prime when it comes to pedestrian safety, as law enforcement and transportation officials joined forces with Sustainable Streets to host a workshop on how to cautiously travel in and around Santa Monica on foot.

Entitled “Pedestrian Safety Workshop: A Focus on Older Adults,” the half-day conference held at downtown’s Ken Edwards Center brought together community members, health and transportation professionals, law enforcement officers, and City officials in an attempt to ensure safe foot traffic in Santa Monica and protect the city’s senior citizens from the perils of the roads.

“I look at this as a refresher course. For most people, the information is very fundamental. It’s not hugely difficult to comprehend. It’s a good reminder,” Ron Durgin of Sustainable Streets said. “For a lot of these folks, (walking) is the only way to get around. It’s really important that they feel like they can reach their destinations. They have places they want to get to, whether it’s the library or the grocery store.”

Accordingly, the morning-long workshop discussed practical ways to be safe and visible while walking in Santa Monica. Most of the information shared focused on simple, common sense tips, such as dressing in brighter colors while walking at night, making eye contact with drivers before entering an intersection to cross, and being mindful of crosswalk signs.

Participants were also told to pay attention to an area’s surroundings, such as how close a sidewalk is to the road, whether a crosswalk is at an intersection or in the middle of the road, and how fast traffic is moving.

In 2009, for example, SMPD reported three traffic-related fatalities, including an 82-year-old pedestrian in a collision at 18th Street and California Avenue. Two years earlier, four pedestrians (ages 70, 80, 86, and 91) were killed in separate incidents in Santa Monica.

Overall, since 2000, SMPD reported 16 pedestrian fatalities of people aged 65 and over. In general, SMPD also cited a statistic from the U.S. Dept. of Transportation where a pedestrian is killed or injured every seven minutes and an estimated 5,000 pedestrians are killed each year in the United States.

SMPD Investigator Chris Dawson, who is a member of the agency’s Traffic Collisions Investigation Unit, spoke to the workshop attendees about the situations where older pedestrians are injured, sharing war stories of many collisions involving vehicles and walkers within Santa Monica.

He also stated while many residents complain to the police department about the perceived lack of traffic enforcement of violations that make it difficult to cross streets and otherwise walk in and around Santa Monica, SMPD officers are actually doing much more than people realize.

For example, he cited on major street in northern Santa Monica where residents repeatedly complained of drivers potentially evading traffic laws and avoiding citations. However, Dawson stated upon further research he found more than 4,000 citation issued in that very location in a recent 12 month period.

Even still, Dawson stated while local law enforcement is trying to be as proactive as possible, there is only so much SMPD and surrounding agencies can do.

“We wish we can be everywhere at the same time, but we can’t,” he frankly stated. “There just aren’t enough police officers out there for us to ticket for every single violation.”

On that note, Durgin said it was just as important as pedestrians to be proactive about how to be safe when walking on the streets of Santa Monica or any other city. To help the workshop attendees learn how they can indeed become more proactive, both him and his partner at Sustainable Streets, Alison Kendall, led the participants on a 20-minute observational block around Ken Edwards Center in downtown.

“It’s not just sitting here, but we’re going to get you up, we’re going to take you out for a quick 20 minute walk,” Durgin said of the observational walk. That’s an element of the education component you have to have. You can’t just talk to people, you have to get them out there. It’s a learning lab.”