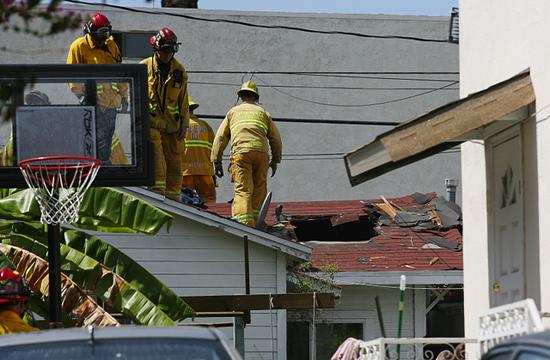 In what was at first described as a targeted attack, but was then described as a freak accident, authorities now appear to be swinging back to the original theory that the explosion that rocked residents out of bed at 6:45 a.m. on April 7 in a neighborhood not far from Downtown Santa Monica was caused by a deliberate device after all.

That morning, a four-foot long, 300-pound pipe steel pipe, which was rooted in concrete, was propelled by the explosion flew 25 feet into the air before crashing through the roof of a residence. These houses are located next to the Chabad House Lubavitch of Santa Monica, a Jewish synagogue located at 1428 17th Street. The blast also reportedly blew out windows of the Jewish school and place of worship. Police evacuated a four-block area following the explosion.

“Responding bomb technicians conducted initial field testing and found evidence of what appeared to be an industrial incident involving cement and other materials. However, a continuing investigation ensued to determine what caused the explosion,” said Sgt. Jay Trisler in a release late Friday evening. “Bomb technicians and detectives conducted further forensic analysis at the scene and, after unearthing much of the large portion of the cement found, uncovered materials indicating that the device appeared to have been deliberately constructed.”

Police are asking for the public’s assistance in locating a transient, Ron Hirsch. Investigators determined that items found in and around the mechanism are linked to Hirsh, who also goes by Israel Fisher. He is described as a white male, with brown hair, green eyes, and is known to have a beard. He is nearly 60 years old, and is hefty, weighing about 207 lbs and standing 5’7’’ tall.

Hirsch is known to frequent synagogues and Jewish community centers seeking charity from patrons. He is already being sought on state charges of possession of a destructive device and unrelated local charges. Based on his suspected involvement in this incident, Hirsh is considered extremely dangerous. Anyone with information as to the whereabouts of him is urged to contact the investigative agencies. The Santa Monica Police Department’s Watch Commander can be reached 24 hours by calling 310.458.8427.

In what has become a roller coaster of conflicting reports, this latest revelation is more in line with those that jumped onto headlines and broadcasts nationwide on the morning of April 7, most of which focused on the close proximity to the Jewish synagogue. Many of those news outlets described the attack as a hate crime aimed at the synagogue, but it appears the police are not so quick to go back down that avenue yet.

If you wish to remain anonymous, you can call WeTip at 1.800.782.7463, or submit the tip online at www.wetip.com. You will remain completely anonymous and may be eligible for a reward, up to $1,000.00, if your information leads to an arrest and conviction.

To watch a video and read a story from when the explosion was believed to have been an accident, Click HERE.