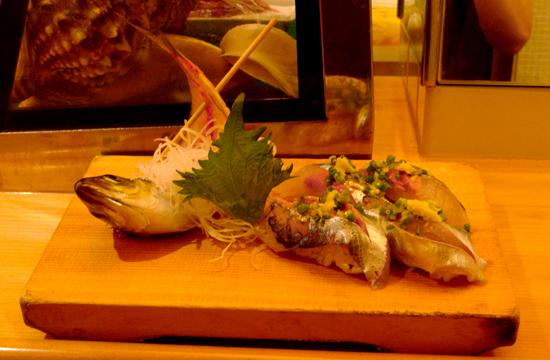 The events unfolding at the stricken nuclear power plant in Fukushima, Japan have some Santa Monica diners concerned about where the fish on their plate has come from. Some restaurants are taking steps to ease their customers’ feelings of uncertainty about the safety of eating Japanese fish these days.

Monitoring of Japanese food imports has stepped up and government health officials have said they have not found a public health hazard in Japanese seafood.

“Seafood from the six Japanese prefectures of concern is examined and screened for radiation by Customs and Border Protection, and the Food and Drug Administration,” said FDA spokesperson Siobhan DeLancey in a phone conversation. “If there’s any indication of radiation, it will be sampled and tested. It must test OK before it can come into the country.

“We have not found any Japanese seafood with elevated levels of radiation. We attribute much of that to the damage to the infrastructure from the earthquake and tsunami that is preventing fishing around the area of concern,” she said this week.

Despite such assurances, some restaurant diners are concerned and restaurants are responding.

Some local Japanese restaurants are buying more fish from other parts of the world, not only to accommodate customers’ concerns, but also because the supply of Japanese fish is reduced due to the destruction of much of the fishing infrastructure in northeastern Japan.

Fish from Japan tends to be expensive and can cost five times more than fish from other regions of the world, said Steve Choi, owner of Miso Fishy sushi restaurant on Lincoln Boulevard. Even before the earthquake, much of the fish typically used in sushi dishes came from all around the world. One exception is the prized seasonal fishes that are indigenous to Japan, which may become harder to find.

At the popular Sushi Roku on Ocean Avenue, there has been an average of two to five questions or phone calls daily from patrons asking whether the fish on the menu is from Japan, said General Manager Eddy Sevilla. “Their concern is natural; people are concerned,” he said. He also observed that some patrons are opting for cooked rather than raw fish.

Sevilla said the FDA does not allow unsafe food to be imported, but to play it safe, the restaurant has reduced the amount of fish imported from Japan, from about 50 percent before the earthquake to about 20 percent now. He said the only fish the restaurant is getting now from Japan is from the waters off the southernmost island of Kyushu, far from the affected area, even though fish imported from other areas would be safe due to FDA screening. “We want to make sure our clientele is happy,” he said. The restaurant has a list documenting the origins of the seafood served at the restaurant. Last week the list included places such as Spain, Boston, Santa Barbara, Australia, and Korea.

Toshio Sakamaki, executive sushi chef at Ozumo on the rooftop deck of Santa Monica Place, estimates that the restaurant is getting about five inquiries daily from customers asking if the fish is from Japan. Only about 10 percent to 15 percent of the fish served at Ozumo is from Japan and all of it is from the Kyushu region, he said. Sakamaki said the restaurant may look increasingly to non-Japanese sources of seafood if customers’ worries continue. In a prepared note, the restaurant reassures customers that “all our shipments from Japan are now being individually inspected and tested by FDA immediately upon arrival in the U.S. No contamination is suspected and these steps are being taken strictly as a precaution.” Recently, the restaurant, along with the other Ozumo restaurants in Oakland and San Francisco, raised $8,000 to help with disaster relief efforts in Japan.

There haven’t been any changes at Santa Monica Seafood on Wilshire Boulevard due to events in Japan, said Executive Vice President and Co-owner Michael Cigliano. “People on the Westside are very much into wholesomeness and knowing where their products come from, and [what’s happening in Japan] hasn’t changed that. Our customers want to know where the fish is from and how it’s caught.”

Cigliano said Japan has never been a big source of product for Santa Monica Seafood and none of the fish sold at the store comes from Japan. Rather than Japanese hamachi (yellowtail), the store sells Australian hiramasa, which is “a shorter, rounder fish, but just like hamachi.”s

“I think the public’s perception of hamachi is that it’s being raised in the [Japanese] area, so rather than take any chances, they’re looking for alternatives,” he said. “But any product from overseas has to be tested by U.S. Customs. Especially now, there’s more scrutiny than ever before.”