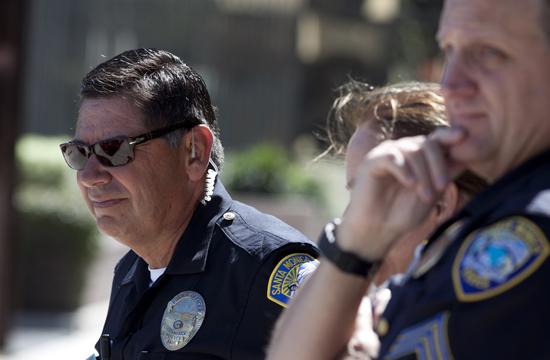 A jewelry salesman was robbed of nearly $1 million worth for merchandise by three masked men outside a restaurant in Santa Monica on April 27.

The victim, employed as a sales representative for a jewelry company, reported that he had just finished having lunch and returned to his vehicle parked in the alley behind the Veggie Grill restaurant at 2025 Wilshire Boulevard, said Sgt. Richard Lewis, the Santa Monica Police Department’s public information officer.

After arriving in town from New York the day prior, the victim had spent the morning visiting local jewelers before having lunch at the restaurant. Upon entering his vehicle after eating, three suspects surrounded him – two on the driver’s side and one on the passenger side – and proceeded to break out the front windows. One suspect pointed a handgun at the victim and yelled something about the carrying case sitting on the passenger seat. The passenger side suspect reached into the window and stole the black hard case messenger bag containing miscellaneous jewelry.

All three suspects fled the location northbound on 21st Street from Wilshire Boulevard in a newer-model Nissan Sentra or Altima four-door, dark or metallic gray in color, which was being driven by a fourth suspect.

After police had arrived, it was discovered that the rear driver’s side tire had been punctured. It was uncertain if this had happened prior to the heist or during the incident.

The three suspects were described as males, unknown race, in their mid-20’s, 5’8” to 5’10,” muscular build and wearing dark Aviator-style sunglasses, dark long sleeve shirts, dark pants and gloves, and bandanas concealing their faces. Mixed reports described them as either wearing hats or hoodies. The weapon used in the crime was an unknown caliber handgun. The victim did not see the driver of the vehicle. Additionally, as the suspects drove away, the victim attempted to identify their license plate, but it was concealed or replaced by paper.

When the crime was reported, the suspect had listed the value of the merchandise at around $1.5 million worth at retail (a figure widely reported by media sources that day) but police have estimate the wholesale value to be substantially less – under $1 million.

Although this appears to be a very deliberate and targeted robbery, Sgt. Lewis said it is not uncommon for jewelry sales persons to be followed at great lengths by thieves. He recalled a similar incident that occurred within the last two years in Santa Monica.

If you wish to remain anonymous, you can call WeTip at 1.800.782.7463, or submit the tip online at wetip.com. You will remain completely anonymous and may be eligible for a reward, up to $1,000, if your information leads to an arrest and conviction.

Callers can also contact Crime Stoppers by either calling 800.222.TIPS, texting from your mobile phone, or by visiting their website at lacrimestoppers.org. Callers may remain anonymous and may be qualified to receive a $1,000 reward Crime Stoppers.