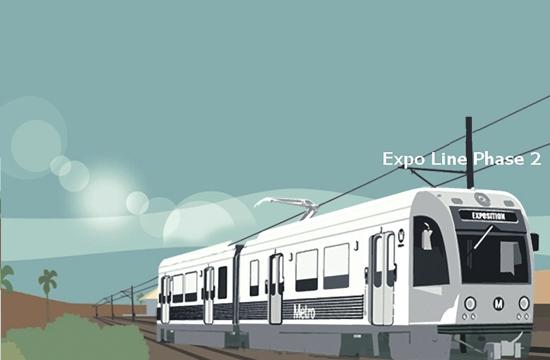 Opening the door for construction of the Expo Line through Santa Monica, the board of directors of the Expo Construction Authority approved a pair of agreements worth about $1.5 billion on March 18. However there is some debate among members of the Santa Monica City Council as to whether the announced plans fit within the City’s vision for sustainable growth.

With the agreements, the Authority prepares to move forward with its plans to bring the Expo Line to its terminus in Santa Monica by 2015, in hopes the light rail will relieve traffic congestion in the area.

“The Expo Line will bring more transportation options to Westside communities traditionally underserved by public transit and who experience some of the worst traffic congestion in the nation,” Gabriella Collin, spokeswoman for the Authority, stated. “Pre-construction work and utility relocation on Phase 2 is expected to begin later this year, with service to Santa Monica scheduled to start in 2015.”

However, Santa Monica City Council member Kevin McKeown indicated he is in favor of the light rail’s arrival here but is concerned about how the Los Angeles County Metropolitan Transportation Authority (LACMTA) and Santa Monica will approach the project.

“The specific goals of the Expo Construction Authority and of our community diverge in ways that cause us concern,” McKeown said. “Expo wants to build the basics, on time and within their budget. Santa Monica wants functionally attractive stations with careful consideration for traffic flow and resident access.

“Because of their focus on budget and deadlines, the Expo Authority is not particularly sympathetic to Santa Monica’s concerns where they might cost money or involve delay, even if that delay is to allow for better planning,” he added.

While McKeown does support the Expo Line’s arrival in Santa Monica, he was concerned about the prospects of the City spending its own money for “betterments” to the Expo Line, similar to how the Los Angeles City Council reportedly contributed nearly $5 million to the Authority for grade improvements at the light rail’s planned Sepulveda station.

“Santa Monica will have to invest in improvements beyond that baseline to make the stations fit appropriately in our downtown and in our neighborhoods,” McKeown stated. “The likely state theft of our redevelopment funds, which we had already agreed to use in part for Expo enhancements, will make this more challenging.”

With phase one of the Expo Line already making progress through Los Angeles and Culver City, phase two is the final portion of the light rail construction project that comes to its terminus in Santa Monica.

The Authority and LACMTA also incorporated a project labor agreement into both contracts, which includes “local hiring provisions and will help ensure that the project will be delivered on time and on budget,” Collins stated.

As Expo Line construction progresses toward Santa Monica, McKeown was concerned of the lack of a strong voice with the Authority or LACMTA, as well as limited public input by Santa Monica residents of how they may contribute to making the Expo Line the most beneficial experience for the city as a whole.

“I wish we had been able to schedule more frequent public hearings and discussions on problems and solutions, as the arrival of Expo will have tremendous impact.  Most of the decision-making is happening at the regional level, though, and the city council has very limited jurisdiction,” McKeown said.

He also added the Council will be conducting “a comprehensive study session on Expo and our Downtown” and considering “an ordinance that would allow us to enter into a cooperation agreement with the Expo Authority” at its April 26 meeting.

Also advocating for the inclusion in the design plans for platforms at the Bergamot station (see “Bergamot Station Village Has Deep History” on pg. A4 of this issue) to make it easier for passenger to access existing and future destinations, McKeown said moving forward with the Expo Line is a step in the right direction.

“The Expo funding agreement and design contract are good news for Santa Monica, because this community has long supported getting light rail connections. Without true mass transit, the vehicular traffic can only get worse,” he stated.

The council has actively discussed funding and construction of Expo Line’s phase two construction since 2009 and has made every effort to shape the future of the light rail within Santa Monica.

“The City sponsored legislation to create the Exposition Metro Line Construction Authority to plan, design and build the Expo light rail,” Planning Director Eileen Fogarty stated in a staff report last year. “The City’s new Land Use and Circulation Element (LUCE) tailored a vision and policies to … proactively integrate the system into the City fabric.”

Skanska/Rados was one of two firms considered by the regionally operated Authority, according to Assistant to the City Manager Kate Vernez; URS/Shimmick was the other firm competing for the design-build contract.