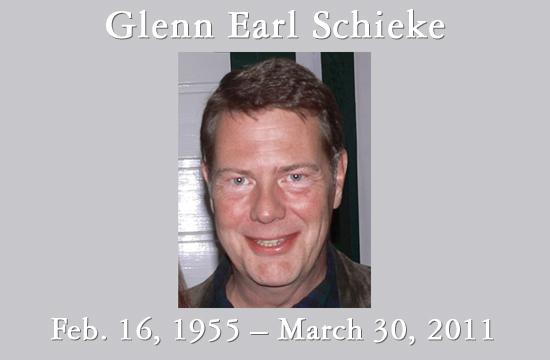 One of the big names in local advertising, Glenn Earl Schieke, suddenly passed away March 30, 2011 due to complications from pneumonia. Schieke was born Feb. 16, 1955.

In addition to being atop of one of the largest and the second-oldest advertising agency in L.A. area, Schieke was a talented musician.

As an accomplished performer on French horn, piano, and organ, he played a wide range of music and venues. He plated with the Denver Symphony Orchestra, the Boston Opera Company, Colorado’s Central City Opera Company, the 1984 Summer Olympics opening ceremonies, the Disneyland All-American College Band, and in numerous theater productions, including the national touring company of The Wiz. Schieke studied under many prominent artists, and had the privilege of studying piano with Vladimir Horowitz, as well as also performing with Barbra Streisand on her “Evergreen” album.

In 1984 he joined The Phelps Group, an integrated marketing communications firm, for the opportunity to combine his passions for music and advertising.

“He led the advertising accounts for more than a dozen major musical instrument companies and directed campaigns to inspire people to enjoy and to make music,” read the obituary featured on the company’s website. “For 27 years, Glenn played a significant role in the company, most recently as Chief Operating Officer and General Manager, helping The Phelps Group become one of the top independent marketing agencies on the West Coast.”

Schieke shared his music gifts with the First Christian Church of North Hollywood, of which he was a member, as its organist for more than 15 years. Not only would he play for Sunday services, but the weddings and funerals of fellow church members and the neighboring community.

“Those who knew and loved Glenn agree – he was music,” read the Phelps’ obituary. “(He) brought joy to people on their happiest occasions and provided comfort to others on their saddest days.”

Schieke is survived by his mother, Leola Schieke, of Lead, S.D.; a sister, Marlynn Belmont of Spearfish, S.D.; brothers Greg (Mary) Schieke of Lincoln, Neb., and Norman Schieke of Tacoma, Wash.; three nephews and two nieces, a grand nephew and four grand nieces, and his longtime partner Terry Cole. He was preceded in death by his father, George Albert Schieke.

Services to celebrate Glenn’s life will be Saturday, April 30, 2011 at the First Christian Church of North Hollywood at 2 p.m.

In lieu of flowers, a donation may be made in Glenn’s name to the National MS Society or an organization or charity of your choice.

Editor’s Note: The primary source material for this information was taken from Glenn Schieke Obituary as provided by The Phelps Group.