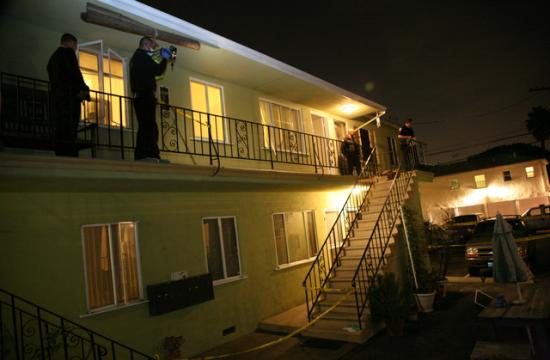 An update to this story can be found by clicking HERE.

At 6:49 p.m., April 13 police officers in Santa Monica responded to a report of an assault with a deadly weapon, which occurred at an apartment building on 2420 Ocean Park Boulevard, at the intersection of 24th Street.

Upon arrival, three officers were unable to enter through the door and instead busted in through a window and found a black man, in his late 40s or early 50s, straddling a woman, stabbing her repeatedly in the torso and face. When this man failed to respond to verbal commands, two of the three officers present opened fire. Witnesses reported hearing four shots fired. Officers declared the suspect dead on the scene. As of press time, the suspects name had not been made public as the next of kin had yet to be notified, but Santa Monica police are classifying him as a transient.

It wasn’t long before a swarm of police cars descended onto the usually quiet block, blocking off the roads in a one-block radius as the sun was setting. The victim, described as a black woman in her 40s, was hauled away in critical condition to a local hospital. As of press time neither her condition nor her identity had been made public.

Rebecca Hammett, an artist from Marin County, said she was walking on the sidewalk outside the building when a neighbor of the victim frantically told her to turn around. This female neighbor was joined by another, both of whom fled from the direction of the assault.

“They were waving their hands about, then went running back into their apartment scared like something bad was going to happen,” she said.

Hammett crossed the street and stood across from the scene, and as she turned to look behind her, she saw a man come running down the outside balcony stairs from the apartment where the incident occurred. Officers would later identify this man as the current boyfriend of the victim. As he came to the street “in a state of shock,” police cruisers screeched to a stop in front of him, with officers leaping from their vehicles.

Lt. Jay Trisler, spokesperson for the Santa Monica Police Department, said the woman’s boyfriend flagged down the officers as they arrived and directed them to her apartment.

“They go into this apartment and I can barely see them, and then I hear four shots,” Hammett said. “Bang Bang. Bang Bang.”

Officers took the current boyfriend into custody, along with another male witness. The current boyfriend has been classified as a victim in this incident, and was treated for injuries of his own which reportedly included a laceration to his hand. Preliminary investigations are painting the deceased suspect as a former lover.

Santa Monica Police Lt. Jay Trisler touted the response time on this incident, as it took only took two minutes for officers to arrive on scene after the initial call to 911 was made reporting the assault. Reportedly it was the current boyfriend who placed that call. Presumably he was unable to enter the apartment, as were the reporting officers before they entered through a window.