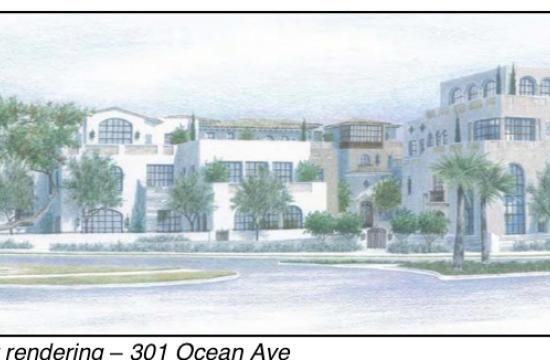 The Santa Monica Planning Commission unanimously voted at its bi-weekly meeting at City Hall on April 20 to allow the developer of a 20-unit Spanish Revival-style condominium complex to move forward with its design plans. This week’s decision upholds an appeal made by 301 Ocean Development LLC to reverse a decision by the Architectural Review Board (ARB) to deny the project’s design plans.

With 39 speakers during public comment, most of whom supported the project in its most current reincarnation, and an extensive staff report and commissioner deliberation, the Commission balked at remanding the issue back to the ARB when it was determined the developer had done all that was to meet the minimum standards of the design process.

Tony Kim, a senior planner with the City of Santa Monica, told the Commission the developer had specifically fulfilled two key requirements that would allow the commissioners to uphold 301 Ocean Development LLC’s appeal.

“Staff … feels that the two findings can be made in the affirmative,” Kim said. “The finding that the project expresses good design, good taste, and, in general, contributes to the image of Santa Monica as a place of beauty, creativity, and individuality.”

One of the 39 speakers, Dennis Wong, who owns the property directly adjacent to the 301 Ocean Avenue property, agreed that the new design fits the persona of the community.

“I think the current architectural renderings greatly complement the design of my building (at 311 Ocean Avenue),” Wong said. “This is especially important because the 300 block of Ocean Avenue consists only of these two lots.”

Eileen Fogarty, the City’s director of Planning and Community Development, stated the project endured significant public process deliberations, which helped shape the current design plans into something that is more consistent with the surrounding community than the original plans. The public process included three community meetings, a designation as city landmark by the Landmarks Commission, and denial of landmark designation by the Santa Monica City Council before the ARB ultimately denied the building design due to the project lacking good design and compatibility with its location and adjacent surroundings.

“We are recommending to the Commission that you uphold the appeal. We believe the project meets all the required ARB findings and criteria,” Fogarty said. “This has been a very extensive process. There would be very few projects that I could envision that would’ve had as many public hearings.”

There was opposition by Landmarks Commissioner member Margaret Bach, who told the Planning Commission the proposed 20-unit condominium project does not reflect the sensibilities of surrounding projects.

“The Architectural Review Board is charged with ensuring that new buildings in Santa Monica are … ‘harmonious with surrounding developments.’ The project before you tonight does not meet that threshold,” Bach said. “This is a gateway building in an area that has a particular aesthetic.”

Dale Goldsmith of the Armbruster, Goldsmith, and Delvac Law Firm disagreed with Bach’s statements, suggesting there is minimal consistency of styles in the community surrounding the 301 Ocean Avenue property.

“The staff report shows that the district is characterized by a variety of styles, including … Spanish Revival,” Goldsmith said in justifying the appeal. “The only common element among these disparate styles is the fact that they have courtyards. This project has a courtyard, therefore we believe it is compatible, and compliments the adjacent potential historic district.”

Echoing similar sentiment was Commissioner Hank Koning, who pointed out the City’s codes do not specifically dictate exactly how each development within Santa Monica should be designed.

“I don’t know that we have a code requirement that says we can’t have boring buildings. It’s really not an exceptional building on this exceptional site, in the eyes of many. Others have said, yes, it is,” Koning said. “I would love to see something fabulous that I would send my architectural students to and say this is an example of what you should do. I don’t think this will be that, but I don’t think that’s necessarily a requirement. I am not handing out an architectural award here.”

Interestingly enough, Greg Ames, a principal with Trammel Crow who spoke to the Commission on the appellant’s behalf, explained his group extensively met with residents and community members to find the ideal design plan, and the selection ultimately presented to the ARB and Planning Commission is significantly noteworthy.

“This project combines classical style and unique contemporary details. It is a celebration of the garden courtyard experience and a sense of community. The courtyard is literally interpreted as an outdoor living room for the residents,” Ames said. “It reflects the current standard for how Santa Monicans like to live.”

According to staff reports, the proposed project at 301 Ocean Avenue “consists of a new 20-unit Spanish Revival style condominium complex within three separate buildings oriented around a central garden courtyard. Fourty-three parking spaces will be provided within two levels of subterranean parking. The project was redesigned from an original proposal for a contemporary styled building that utilized expansive glazing and steel and presented an uninterrupted façade that did not include a courtyard or any openings from the streets.”

The staff report further stated community members “expressed their concerns with the project’s expansive massing and lack of residential appearance.”

Should the project ever be realized, the developers would have to demolish an existing 47-unit vacant apartment complex on the site.