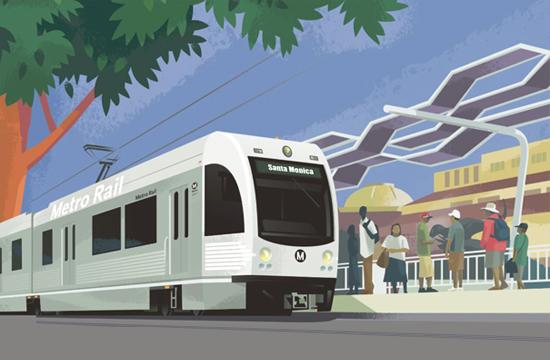 With the Exposition Light Rail Line plowing into town and the Big Blue Bus (BBB) planning significant changes to its service area, Santa Monicans got a peek into the future with a community meeting and a pair of city council agenda items on upcoming changes to public transportation in the city.

The council approved various adjustments to BBB’s service hours, routes, and stops when it voted on the issue just before midnight at its May 10 meeting. One day earlier, the Exposition Construction Authority hosted a community meeting with design-builder Skanska/Rados at the Civic Center to gather up local support for the planned light rail coming into Santa Monica. Although no official actions were taken in regard to the Expo, the community meeting reflected the drastic changes soon coming to Santa Monica.

With construction work starting in the next six weeks, the Expo Construction Authority provided a generalized sneak peak at its plans moving forward with the rail line, which will connect Santa Monica to Downtown Los Angeles. As the Expo’s first phase prepares to open later this year, planners are now looking forward to executing the rail line’s second phase in Santa Monica.

During the next few weeks, and heading into summer, Expo officials say they will be performing mostly transitional work along the light rail’s planned route. The more extensive street improvement and utility work will begin in the fall, according to the design-builder. It was also announced that as many as 400 track workers may be working throughout the city during the peak of construction.

Yet before construction reaches a fever pitch, both the Expo Authority and the designers said they hope to hold more community meetings throughout the design build process. With notices of community meetings expected to be sent to the City’s residents during the summer, Exposition Construction Authority CEO Rick Thorpe said it was vital to involve locals as early as possible.

“We’re coming in trying to put in an improvement that is going to be there for 100 years,” he said. “We need to make sure that it works within the community that we’re bringing it to.”

The following evening, the council considered the BBB’s three-year service improvement plan, a line-by-line analysis of the transit service and service area market conditions, and alternatives analysis for transit connections to Expo stations in Santa Monica.

As part of its public hearing, the council ultimately approved the service changes recommended by the BBB. The issue will be revisited.

“On August 28, 2011, the first of an anticipated series of transit service changes are recommended for implementation on Lines 1, 2, 7, Rapid 7, 10, 11 and 13, and include the implementation of the new interim parking shuttle,” Stephanie Negriff, the outgoing director of Transit Services, told the council in her staff report. “These proposed service changes will result in an increase of 7,619 annual service hours at an incremental cost of $419,000.”

In sharing its three-year-plan with the council, BBB officials said their planned process includes feedback from community outreach, and the possibility to make future strategy revisions, public hearings, and reviews with the council.

Through its proposed alterations, cuts, and plan changes, BBB hopes to improve traffic circulation in Downtown Santa Monica while also preparing for Expo’s second phase, supporting the Land Use and Circulation Element (LUCE), and maintain a balanced budget. To achieve this, BBB made several recommendations to “move resources to the most productive services” while balancing “community needs with resource constraints.”

Specifically, BBB suggested several alterations or cuts to certain lines. As Negriff pointed out, changes would be made to Lines 1, 2, 7, 10, 11, 13, and Rapid 7. For example, BBB’s plan called for reducing duplicative service between Lines 1 and 2; improving performance and subway connections for Line 7 and Rapid 7; reducing the “unproductive service” of Line 13; improving the on-time performance of Line 10; and improving downtown circulation through Downtown Ride. Additionally, the Rapid 7 service would be extended to the Metro Purple Line’s Wilshire/Western station.

Several students from Santa Monica College and UCLA attended the public hearing. Liza Taylor, a graduate student at UCLA, was concerned about the service changes to Line 2 in the Ocean Park area.

“I use the bus to commute to work and I can think of, off the top of my head, nine other people who use it regularly to commute to work. We’re all UCLA graduate students, and because of that, we are low-income. It is our only way of getting to work,” she told the council. “When I get on the bus, there are other people waiting in that stretch between Hill and Pico, so it is used by the community.”

Valerie Griffin, chair of the Wilshire/Montana Neighborhood Coalition, told the council she believed the proposed line changes, while ideal for long haulers, did not make much sense to locals who frequently use the BBB.

“We are very concerned that routes are shifting away from neighborhood service and (are instead being) optimized to serve students. We realize that providing bus service to students does help the community, but there are other transit needs which remain unserved,” Griffin said. “The larger trend of switching more services to Rapid and cutting local services is a matter of concern. The problem is … short community bus trips are less convenient (for locals).”

The service changes, which are for the short term and not for the entire three-year period before the next scheduled BBB internal analysis, would be implemented in August. With community meetings set for October, the service changes will be considered by the council again in November.

“I am willing to try this for a few months to see what happens,” council member Kevin McKeown said, addressing the concern about bus noise expressed by residents.

Mayor Pro Tem Gleam Davis complemented McKeown’s backing, saying that while the proposed changes are not permanent, the council is not recommending BBB to experiment with service changes in the interim process.

“I don’t want anyone to think we’re going to try this for three months and see how it works,” Davis said. “I think it does make sense to revisit it … and (in three months) you can tell us how it’s working, if you are still receiving complaints.”

The council also adopted an ordinance authorizing City Manager Rod Gould “to negotiate cooperation agreements with the Exposition Metro Line Construction Authority and with the L.A. County Metropolitan Transportation Authority for the construction and operation of a light rail transit system” in Santa Monica.

Council members Bob Holbrook and Pam O’Connor were not present at the May 10 meeting, while council member Bobby Shriver excused himself prior to the conclusion of the BBB public hearing, leaving the governing body to barely operate at a quorum.