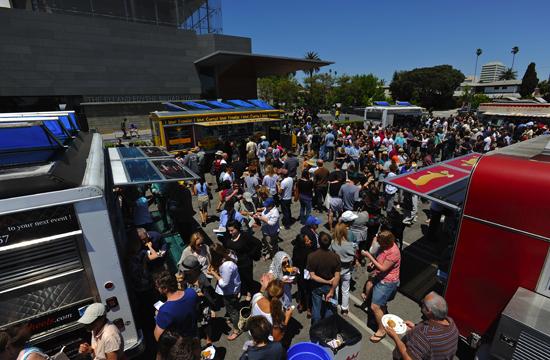 Today 2.5 billion people around the world eat street food daily, said Kleiman. While the role of street food can vary in different cultures, there are common qualities that give street food its global appeal: It’s tasty, cheap, quick, and satisfying in the serendipitous way in which it brings people together. Street food is quick food and anyone can make it, said Tila, but it’s not fast food. For example, a vendor can spend hours simmering the broth for noodle soup or braising the meat for a dish. Many vendors specialize in one kind of dish, and he recalled growing up in Thailand and being instructed by his mother to pick up an assortment of food from specific vendors for the family meals.

“At street stalls you just go up and order what you see other people ordering. You see it cooked in front of you, not like in restaurants, and you know exactly what you’re getting. It’s an immediate sensory experience,” said Arellano. Street food also serves as a window into a local culture. In Mexico City, there are multiple food stands on every corner; they’re part of daily life, part of the neighborhood, said Tellez. “When you get up in the morning, rather than make your own coffee you go across the street to get your coffee.”

There’s no room in Mexico City for vendors who don’t deliver good food, said Tellez, who described the economics of street food and a system in which a vendor will find an unoccupied street corner, look for the person who unofficially handles that corner, and pay that person for the right to use that spot. “It’s almost like paying rent, and it’s not cheap,” she said.

In Penang, Malaysia, street food is available any hour of the day and is part of the grazing culture there; Malaysians eat 24 hours a day,” said Eckhardt. “Street stalls are handed down from one generation of the family to the next, so the vendors have decades of experience. Still, you’re never 100 percent sure that a vendor will be there the next day” because of a street corner-rent system similar to the one in Mexico City.

In Los Angeles, where the gourmet food trucks are evolving from novelties to outlets for good food, the roots of street food go back to the 1880s, when there were many tamale wagons in Los Angeles, followed by a wave of taco trucks in the 1970s and 1980s, said Arellano. The panel discussed success stories of street food vendors that have developed into Los Angeles landmarks, such as Pink’s hot dogs, which started out as a hot dog cart.

After hearing the panel discussion and seeing photos of global street food projected onstage, the hungry audience moved outside to sample food from six food trucks that had converged in the parking lot of The Broad Theater: Mariscos Jalisco, Let’s Be Frank, India Jones, Piaggio Gourmet on Wheels, Nom Nom Truck, and Crepe’n Around.

Sandy King, West Los Angeles resident and former director of Jewish Family Services, found the talk, “Very interesting; of course, the highlight is always the food,” she said as she enjoyed her first taste of food truck fare, a curry dish from the India Jones truck. “This is a whole other world; my first experience” with the food trucks, she said.

Her friend Sally Edelist said, “I didn’t know if [the food trucks] are good or not. I know they’re not regulated so I wasn’t sure, but I think being here and tasting them, they’re wonderful. We learned that there are very good ones and not good ones.”

Los Angeles residents Heather Adams and Chris Moore said they typically eat lunch three or four times weekly at the food trucks. Moore said he has eaten at 60 food trucks; out of those, there are 15 to 20 trucks that he would patronize regularly. “I feel like they’re a lot of food trucks now; a lot of them are doing the same thing. They’ll weed themselves out and the good ones will stick around. I think the copycats will disappear. There was some infighting with the city about where they can and can’t park – hopefully that gets worked out. I’ve never gotten sick [from eating at the trucks], the food’s been good,” said Moore, an online television editor.

Adams, a television post-producer, said the panel discussion made her want to go back to Asia and try more street food there. Raffi Kachatorian and Stella Ohanian, residents of Porter Ranch, said they loved the event, especially because the panel discussion and street food photos “brought back a lot of experiences we recently had in Bangkok. It was great to hear an elaboration of what exactly we had seen there; what they were describing gave more depth to what we experienced in Bangkok. It was good to hear some background on how these things started and how it really affects the people who live with that street food, not just people who visit.”

Kachatorian, who travels often to the Far East, said his concern about food safety held him back from trying street food until recently, when Ohanian “opened my eyes and said to be more experimenting. It was really interesting once I got started, and you kind of get hooked.” He said he had been afraid to try the street food in Vietnam, China, and Bangkok, but he hasn’t had a bad experience so far; “I’ve had more bad luck with restaurant food than with street food,” he said.

The couple said they’ve become more curious about the local food trucks. “Street food is so accessible overseas when you travel, but not so much in Los Angeles in our daily lives. But more and more we’re talking about going out and looking for the food trucks and finding out more about which ones to try. We have to go out of our way, but I think it would be worth it; it’s interesting,” said Kachatorian.

The Global Street Food event was a collaboration between Santa Monica College Associates and KCRW, a National Public Radio affiliate based on the college campus.