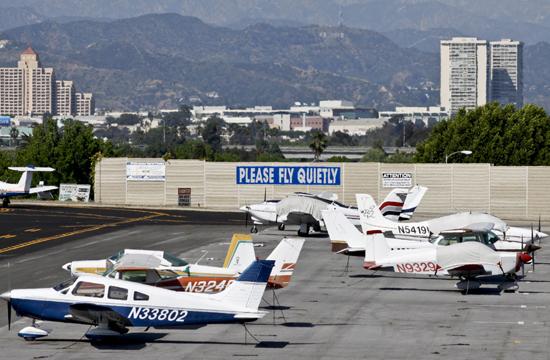 Editor’s Note: This report is part of an ongoing look at the issues surrounding Santa Monica Airport. This particular story is a follow-up to one printed in the April 22-28, 2011 issue, entitled “Airport Faces Pressure from Feds, Local Officials”that can be read by visiting smmirror.com, clicking on the “Expand & Filter” button, and then selection the “Santa Monica Airport” tag.

When the Los Angeles City Council passed a resolution on April 21, it announced its intent to support legislation that would permanently establish a new flight plan at Santa Monica Airport (SMO). The new plan calls for diverting flght paths away from Los Angeles communities surrounding the airport, and instead proposes they be directed over Santa Monica’s own resident’s homes.

Internal reports indicate the Council’s action was based, at least in part, on a health impact study conducted at UCLA. Among some of the reported findings include evidence of very high levels of ultra-fine particles, black carbon, and other potentially harmful health impacts that they linked to SMO.

However, the UCLA health risk assessment has come into question, specifically because pediatric interns conducted it over a short two-week period.

“The study wasn’t done by the South Coast Air Quality Management District, it wasn’t done by the U.S. EPA, and, to my knowledge, it hasn’t been vetted by any other agency. To my knowledge, none of the pediatric interns had any background in doing health assessments associated with air quality impacts,” SMO Director Bob Trimborn said. “Their report, for it to have validity, needs to be fully vetted by individuals within the field of air quality and risk assessment.”

Whether the City of Santa Monica is considering conducting or sponsoring its own study in response to resolve the question remains to be seen.

“We’ve had the SCAQMD do a very extensive study of the airport’s emissions. They didn’t find any (deviation) of air quality standards from the airport,” Trimborn said. “The agencies that are responsible for air quality analysis … are the ones that really should be doing these kinds of studies, not the City.”

The political clamor started last month when Congressman Henry Waxman, whose 30th congressional district includes Santa Monica and West Los Angeles, managed to include an amendment to the FAA Reauthorization Bill of 2011 to address the lack of runway safety at SMO.

The L.A. council, in addition to expressing its support for a permanently altered flight plan, also sought to shut down the six flight schools operating out of SMO. Trimborn said the flight schools were acceptably and legally operating at SMO.

“Rep. Waxman has once again demonstrated his continuing support for our efforts to improve immediate safety at the airport, and we greatly appreciate it,” McKeown said via email shortly after the L.A. council made its resolution and the House of Representatives passed FAA Reauthorization Bill of 2011. “Eliminating the mismatch between a short runway and faster jets will only be the beginning, though. We need to limit the air pollution from jets and leaded-fuel piston planes, and drastically reduce flight school activities and the takeoffs and landings over densely populated neighborhoods.”

Those densely populated neighborhoods also include portions of L.A., including Venice, West L.A., and Mar Vista.

By mirrormmg May 6, 2011
in Health
Related Posts

A Westside Bloomingdale's is set to shut down, adding to a string of high profile closures in the area. This...