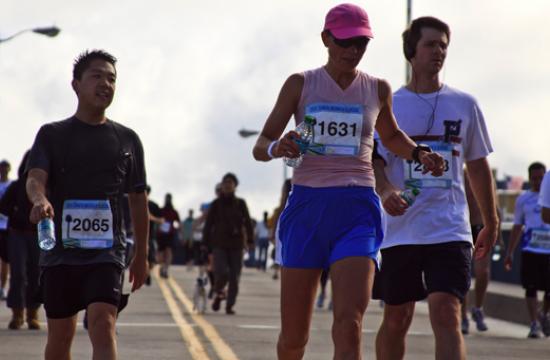 When the runners of the Santa Monica Classic woke up on Sunday morning, they dreaded having to run in the rain.

Residents remember the LA Marathon on March 20. Cold, wet conditions were not what the runners wanted.

“I was so tempted not to go,” Karin Beck, who ran the 5K, said. “But then I called my friend and she called me and we thought, ‘Get off your bed. Get out there. You got to run.'”

But at 7:04 a.m., just before the the 7:30 start time, the rain stopped and the sun started shining, and all were relieved.

Almost 3000 runners participated in the events two races, the 5K and the 10K. And a few competed in both.

“It was to get a good training day,” said Christian Hesh, who ran both events. “I was supposed to run eight miles at close to the same pace yesterday. So I thought, ‘Well, there’s a race today. Why not go get nine miles?'”

Hesh won both events with times of 15:53.0 in the 5K and 31:16.4 in the 10K. He confirmed the legend that he ran from the finish line of the 5K through half the course (the opposite direction) back to his car to change his shorts and shirt. Once he was ready, Hesh ran back to the starting line of the 10K with about three seconds of downtime before the second event began.

“I wish I could have levitated,” Hesh said. “Next time, I’m going to leave my skateboard at the finish line. It will be faster.”

Proceeds from the race were given to support the Heal the Bay, who used the event’s afterparty to educate on how trash makes its way from Santa Monica’s streets onto the beaches through gutters and stormdrains.

“We’re really lucky to have this sponsorship so that we can continue doing our work every single day,” said Saira Gandhi, Heal the Bay’s volunteer coordinator.

Heal the Bay hosted a small beach cleanup after the race and is hosting another May 21 in Playa del Rey.