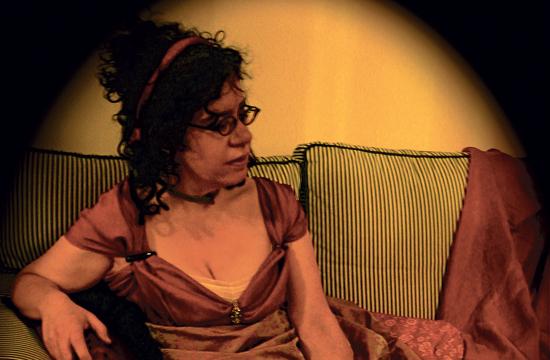 The coffeehouses of Venice are a long way from the Glastonbury Festival in Scotland. But local poet Ellyn Maybe and her musical backup band are hoping to jump over the pond by raising enough money to pay their way to the festival, where they are booked to open one of the many stage shows during the five day event in late June.

“It’s a real honor,” Maybe said of the invitation to appear at Glastonbury. With a history dating back to 1970, this year’s event has more than a dozen stages, a lineup of artists that includes Paul Simon, B.B. King, The Chemical Brothers, Queens of the Stone Age, Morrissey, Beyonce, and U2, with an expected attendance of 250,000.

The catch, Maybe says, is that the stipend for the gig won’t pay for air fare and lodging for the entire band. Since they accepted the invitation, they’ve been raising funds for the trip via donations and benefit concerts.

Ellyn Maybe has long been familiar to followers of the Los Angeles poetry scene for her readings at coffeehouses and at Venice’s Beyond Baroque Literary Arts Center. Her career received a boost when she teamed up two years ago with her cousin Harlan Steinberger and a team of musicians for the CD “Rodeo for the Sheepish.” Combining Maybe’s poems recitations with musical background on the synthesizer, percussion, horns, and background vocals, the album was praised by Greil Marcus on his Real Life Top Ten blog. Last summer, the band did a residency at Santa Monica’s 212 Pier Café and were visited by Jackson Browne, who soon became an avid fan.

The band’s evolution was “sort of an accident,” according to Santa Monica resident Steinberger. A veteran musician, producer, and composer, he and Maybe had met back in their home town of Milwaukee as teens but had not seen each other for years, even though Maybe lived in nearby Marina del Rey and performed frequently in Venice.

One evening in the spring of 2009, Maybe planned to go to a film screening at Beyond Baroque but felt too ill to attend. She later learned from an employee that Steinberger, as producer of the film being shown, had come to the screening and had bought a Beyond Baroque membership.

When the two got in touch, Steinberger who owns the Hen House recording studio and record label in Venice, invited Maybe to come to the studio to record a few tracks of her poems.

“After she recorded some poems it occurred to me that I should score them,” Steinberger said. “I put vocals on one song-then Ellyn said we should have vocals on all of them.”

The result was what Greil Marcus has characterized as “pop poetry.”

“It’s very verse-chorus driven,” Steinberger explained. “Ellyn is like the singer who recites her poems-they’re the verses-and then the chorus comes in.”

Musicians who have sat in at the band’s gigs have varied, but the current lineup includes Steinberger on percussion; Robbie Fitzsimmons on keyboards; Danny Moynahan on sax, flute, and musical saw; Tommy Jordan on rhythm instruments; and Paul Bushnell on bass. All provide the chorus vocals while Ellyn Maybe recites her image-filled, humorous, and poignant poems.

While the band (who toyed with several names but has settled on the Ellyn Maybe Band) has played all over the Los Angeles area and has toured other cities. Glastonbury is a huge step forward in making them more visible. For the sake of the exposure, the band members are “taking a risk” according to Steinberger, by pre-paying their travel expenses and planning scenarios.

When an attempt to raise funds through the Kickstarter website fell through, because not enough money had been pledged, Maybe reached out to individual donors and collected money from some of them.

Steinberger said the community has also reached out, citing an offer by Diana Rodgers of the Mar Vista Farmers Market to have the band play at the market to raise money for their trip.

Beyond Baroque has turned the Ellyn Maybe Band’s May 28 “Poetry Rodeo “into a fundraiser. Beginning at 5 p.m., the evening will feature guest poets, raffles, silent auctions, barbeque and refreshments, DJ sets, an open mic segment, and Ellyn Maybe and the band. Admission is $10 and all proceeds will go toward the Glastonbury gig. Beyond Baroque is located at 681 Venice Boulevard, Venice, 310.822.3006.

The Ellyn Maybe Band’s “Rodeo for the Sheepish” is available from henhousestudios.com.

By mirrormmg May 19, 2011
in Uncategorized
Related Posts