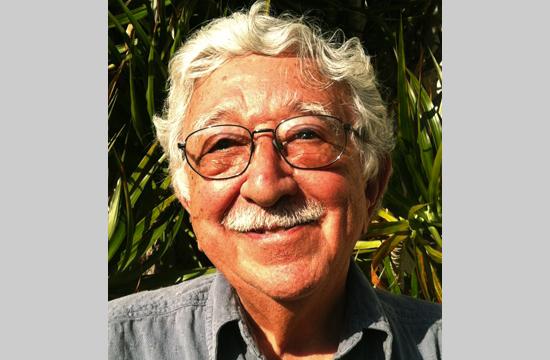 Ernest Marquez, the historian of the Marquez family, was born in 1924 at Mary Martin Hospital in Santa Monica. He grew up in the family home in Santa Monica Canyon on land that was part of the original Rancho Boca de Santa Monica, land that had been in his family for generations.

“In the Canyon cows roamed free and so did kids. As a boy I spent my time at the beach, swimming and playing in the creek and climbing the bluffs,” said Marquez.

Miss Verna Weber was the only teacher at the one room Canyon School where Marquez was one of the 30 children in the school. “We all loved Miss Weber. There were four children in my graduating class. I was friends with everyone in the school,” said Marquez.

As a child he helped his cousin, Angelina Olivera, take care of the Marquez Family Cemetery on San Lorenzo. He listened to the family stories from his aunts and uncles, who were a generation closer to the old history – a history that went back to the time of the American Revolution.

His grandson, Ysidro Reyes, joined with Francisco Marquez to apply for a land grant for Rancho Boca de Santa Monica. It was 1839, Mexico had won the War for Independence, and Alta California now belonged to Mexico.

To apply for a Land Grant one had to be a Mexican citizen, Catholic, and Spanish speaking. The application had to include a diseno (a hand drawn boundary map) and a letter to the Pueblo Council requesting the land, promising to build a house within one year, and certifying ownership of a herd of 150 cattle. The Pueblo Council reviewed the application and, if they approved it, forwarded it to the Governor of Alta California.

The boundary map of Rancho Boca de Santa Monica started above Topanga Canyon on the beach. Two horsemen, each holding a tall pole, connected with long buckskin ropes of 100 varas (a vara was approximately equal to one yard) marked the perimeter.

The Mexican government awarded Reyes and Marquez Rancho Boca de Santa Monica. When they died and left the land to their families, the Rancho was United States land.

Pascual left his land to his children, and it was sold. As the cemetery portion couldn’t be used, it was deeded back to Pedro Marquez. He accepted the cemetery but not the lot that gave access to the cemetery. That lot was then deeded to a neighbor who offered to take care of it.

When Ernest Marquez retired in the 1990s, he could finally focus on what he calls his “real job, the family history.” He began to work on protecting the family cemetery. The old agreements, which had not been properly recorded, were ancient history. He had both a title and an easement problem to solve.

The first step was to gain the right of an easement to the Marquez Family Cemetery, which was won through a court order. The title was still in the name of Ernest Marquez’s uncle, Pedro Marquez, who had died 30 years previously. The Judge directed Ernest Marquez to get quitclaim deeds from his cousins, which he did.

The next step was to reopen the Estate of Pedro and Aurora Marquez. In 2010, with help from the Marquez and Reyes families, and especially with the help of his lawyer; daughter, Monica; Ernest Marquez became the owner of the family cemetery.

La Senora Research Institute, a nonprofit foundation, joined with the families to raise money to purchase the easement lot between the cemetery and what is now San Lorenzo. Help also came from UCLA archeologists who used high tech equipment to locate burial sites, from the City of Los Angeles and Council member Bill Rosendahl, with support for a landmark designation, from pro bono attorneys, and from neighbors and friends. Working with the foundation, the family will plant a traditional, sustainable garden on the easement lot, and the garden will become the new entrance to the cemetery.

Ernest Marquez hopes “the cemetery and garden will be a reminder to the land grant families and to the people of Santa Monica of the history and legacy of Rancho Boca de Santa Monica.”

By mirrormmg May 31, 2011
in Opinion
Related Posts