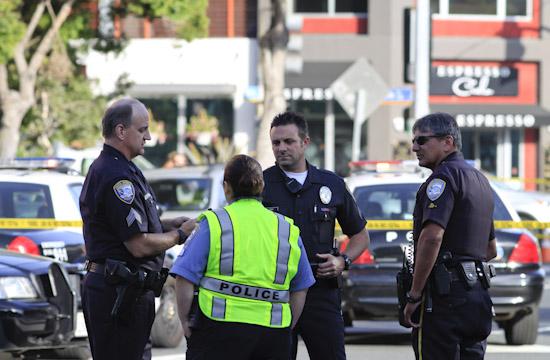 UPDATE May 5, 10:30 p.m.: Santa Monica Police Have released the names of the individuals involved in this incident. The woman who jumped was 27-year-old Raisa Shamailovna Danilova. She was described as a white woman, not an Asian as previously reported. Additionally, Santa Monica police reported that Danilovas condition was upgraded to critical, but stable.

The two individuals who were on the roof with Danilova when she jumped were a 19-year-old male, Chayanne Riguad, and a 20-year-old female, Hannan Tobias. Both were released after it was determined they had not part in Danilova attempted suicide.

Original Post May 4, 4:30 p.m.: A woman who was dancing naked on a tall building on Main Street in Santa Monica plummeted at least five stories to the street below and was transported, in critical condition, to a local hospital on May 4.

As of press time, the woman had not succumbed to her injuries. She was described as Asian, in her mid-20s, with a shaved head. Santa Monica Police Department officials will not release her identity until her next of kin has been notified. The woman was suffering from a compound fracture in at least one of her legs, as well as multiple other serious injuries, but officers were unable to confirm if she suffered any head injuries.

She dropped from a five-storey building, located at 3005 Main Street, which houses the business One Life Natural Foods, across from O’Brien’s Irish Pub and Restaurant. Officers were already en route to the location at 3:18 p.m. that day because callers had reported the indecent woman, along with another female and a naked male on the roof. All were described as in their mid-or late-20s, and are listed as semi-transient. The injured woman was described as dancing along the edge of the building and swinging from a flagpole.

“Based on their investigation to this point, she jumped. They are looking at it as an attempted suicide,” said Sgt. Richard Lewis, the spokesperson for the Santa Monica Police Department.

Lewis said that based on corroborated witness reports, officers have determined that the other two individuals were not near the woman when she plunged – in fact they weren’t even aware she had fallen until they turned around and couldn’t find her. When they realized what had happened, they fled the scene, but were picked up by officers several blocks away near Fourth Street and Raymond Avenue. Both the male and the female are being kept in police custody, but Lewis said that no charges have been filed. An initial investigation found that the group gained access to the roof via a fourth storey fire escape. Officers found clothes, wine, and a guitar case on the roof.

As of the time of the report, SMPD still had the woman listed in critical condition. More details will come as they unfold. Check back to smmirror.com for updates.