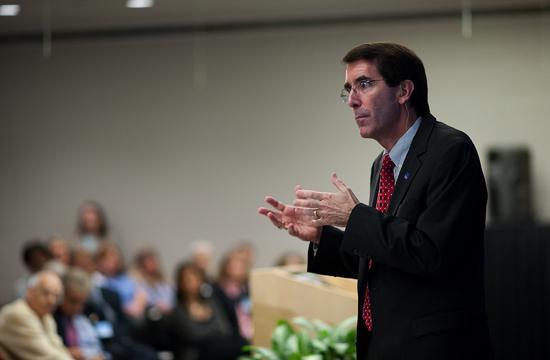 With the most expensive health care system in the world, costs in the United States keep escalating. On May 23, Arthur Kellermann, vice president and director of RAND Health, discussed the problems facing the U.S. health care system at a RAND “Issues In Focus” event in Santa Monica.

America spends about $2.5 trillion a year annually on health care and it is the main contributor to the federal deficit, Kellermann said. “Health care costs every year in this country outgrow inflation,” he noted. “Every year it is taking a bigger piece out of the economy.”

Yet when compared with the rest of the world the U.S. ranks 26th in infant mortality, 24th in life expectancy, and 39th in overall health system performance. In addition, adults nationwide only get the recommended standard of care 55 percent of the time and roughly 1,000 Americans die each week because health care professionals didn’t follow the right guidelines. Therefore, the U.S. ranks 19th worldwide in deaths for conditions the medical community knows how to treat or because many Americans don’t have health coverage.

“(We) do in fact have a system without brakes because there is no one in the system – from a consumer to a payer – who has a direct interest in changing the system,” Kellermann emphasized. “(Patients believe) if it is new it must be better, my doctor knows best, and I don’t worry about the price because I’m insured. Physicians believe the more I do, the more I make, the less I do, the more risks I take. I don’t worry about the price – he/she is insured. Hospitals want to fill every bed with an elective admission and perform as many high priced procedures as possible.” Lastly, he added “vendors know new products fetch higher prices and bigger profits.”

At the same time, Kellermann highlighted a disturbing trend of payers hiding and trying to get someone else to pay the bills. Employers are shifting more of the cost of health coverage to their employees or are trying to cut the number of covered workers. Insurers are raising premiums, trying to duck claims or delay paying claims. The federal government is trying to shift health costs to the states and the states are trying to shift their costs to the federal government.

Waste is also a big problem according to Kellermann. “The U.S. wastes about $750 billion per year on unnecessary or ineffective services, excessive administrative costs, high prices, medical fraud, and missed opportunities for prevention.”

Kellermann also discussed some other issues that are driving up costs such as the fact that two-thirds of medical students decide to become specialists because they will be paid much more when the population desperately needs primary care physicians. Americans also pay specialists three or four times as much as primary care physicians when evidence indicates that in places where there are more primary care doctors less money is spent on healthcare and people are healthier.

Also, U.S. hospitals and health institutions spend too much on new medical technologies before finding out if they are really better than what they are replacing, Kellermann said. Americans ignore the consequences of poor health in young adults, childhood obesity, and other issues despite being aware of the price to be paid down the road with increased incidences of diabetes, hypertension, and other preventable diseases. The American healthcare system also isn’t encouraging doctors and patients to have thoughtful decisions about the end of their lives. “We often spend astronomical amounts of money on the last 90 days of life often without a positive outcome,” he said.

Kellermann concluded his remarks by stating one of the future focuses of RAND’s research will be on how to do a better job to control health care costs because “there’s enough money in the system today to meet everyone’s needs.”