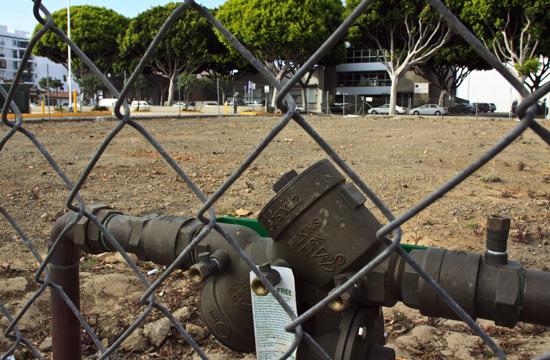 The Santa Monica City Council inched closer at its biweekly meeting on May 10 to develop 127,000 square feet of Downtown land on Arizona Avenue between Fourth and Fifth streets, as the council members considered using the City-owned property for activities such as shopping, tourism, even ice skating as the beating pulse of the municipality’s thriving commercial and tourism core.

Among the specific uses for the lot the visioning process considered included several shops and restaurants, a meeting space, and a boutique hotel. Just the same, corporate and residential tenants would also fill in apartment units and office space. Planning Director Eileen Fogarty told the council it was important to meticulously plan out the property’s use, considering its ideal size and location.

“This is a three-acre contiguous site in the heart of our Downtown,” Fogarty said, adding the City-owned land is larger than comparable uses of public spaces, such as New York City’s Rockefeller Center or Pioneer Square in Portland, Ore. “It can be a catalyst for the future of Downtown. So it’s very important, as we look together at this site, that we do it right.”

As for doing it right, a pair of community meetings were held in March to garner local input on how residents envisioned the space being used, factoring in circulation issues and the immediate area’s history.

The property would still take several years to develop, however, as specific plans have yet to manifest. City staff said the project is still in its planning phase. Still, the council had a sneak peek into what could potentially fill in the City-owned property, as a design consultant presented several images of potential uses, including doubly using the central open space for general recreational activities during the spring and summer months but then be converted to an outdoor ice skating rink in late fall and into winter.

Amidst the clamorous excitement in considering the potential uses of the property on Fourth Street and Arizona Avenue, Council members considered a few minor hiccups. Council member Bobby Shriver cautioned that the city not blur the line between property owner and developer. He added it was perfectly acceptable to work with professional developers in cultivating potential uses for the site on Arizona Avenue. New York City’s Rockefeller Center, he pointed out, was designed and built by a private developer, not by a city council.

“I know we all have an anti-developer kind of feeling here, but the truth is … (developers) are the creative people who created most of the places (such as Rockefeller Center or Pioneer Square),” Shriver commented. “Why are we a better developer than a developer would be?”

Creativity and developer sentiments aside, a bigger concern for council members are parking issues. A few council members saw the development of this City-owned land as an ideal opportunity to add some new parking spaces, especially in light with the loss of Parking Structure 3.

“This is an opportunity to build as much parking as we economically can,” Mayor Pro Tem Gleam Davis stated, recommending to staff to consider the possibility of building a subterranean parking structure beneath whatever is ultimately built on the property at Fourth Street and Arizona Avenue. Similarly, Council member Terry O’Day stated, “We should have no above ground parking whatsoever.”

Another cause for concern for both Davis and Council member Kevin McKeown was whether the planned development should include office space. Both were concerned the existence of office space would dampen the area’s energy, as many people would not fill the space after business hours.

As this agenda item was merely an update to the council on the visioning process of the City-owned space at Fourth and Fifth streets and Arizona Avenue, the board took no specific action. The next step in the process is a series of community workshops hosted by the Planning Commission and Downtown Santa Monica, Inc., to further gauge local input on best uses for the site. After community input is gathered and managed, the ideas will be presented to council, which will then turn around and commence searching for a developer.