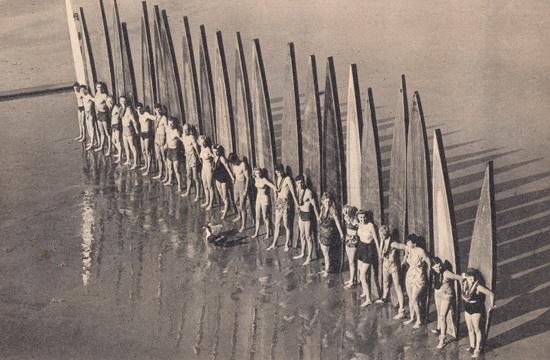 “Waterman” was the descriptive name given to the early greats of surfing like Tom Blake and Pete Peterson, Santa Monica’s most famous Watermen, who shaped the culture of Santa Monica and of beach communities around the world.

The Santa Monica Pier Paddleboard Race and Ocean Festival, June 11, continues the Waterman tradition with an all day celebration of life at the beach featuring: paddleboard, outrigger and dory races; live music; and a ‘museum for a day’ showcasing the Waterman history and the history of lifeguarding, surfing, paddleboarding and skateboarding. The event benefits Heal the Bay.

Paddleboards were first used in Santa Monica in the 1920s when Blake, one of the earliest of the Santa Monica Lifeguards, introduced the paddleboard as a way to rescue distressed swimmers.

Blake began surfing in California in the1920s. He worked as a lifeguard, a swimming instructor, and a movie stunt double. He was also an important surfboard innovator. He shaped boards from the ancient, Hawaiian olo design to see if he could build a faster board to use in the annual and popular surfboard paddling races held in southern California each summer. To lighten the weight of the surfboard, Blake took his 16-foot olo replica board and drilled it full of holes to lighten and dry it out, resulting in the first hollow surfboard.

In 1928, armed with his olo replica, Blake won the first Pacific Coast Surfing Championship. Reports of the day said 10,000 people gathered to celebrate the holiday and watch the races. Blake used his hollow surfboard in the race from the California mainland to Catalina Island over a 26-mile course across open water. Blake made the trek in 5 hours and 53 minutes.

One of his most enduring contributions, the surfboard skeg – or fin – which he introduced in 1935, went on to be an integral part of surfboard design.

Pete Peterson, who grew up in Santa Monica Canyon, soon joined Blake in the surfing world. Peterson became recognized in the 1930s as the Mainland’s best surfer, winning the Pacific Coast Surfing Championship four times out of 10 (1932, 1936, 1938, and 1941).

More than a contest surfer, however, Peterson was a Waterman in the truest sense of the word. In 1939 Peterson took his paddleboard over the massive open ocean bumps from Anacapa Island to Santa Monica Pier, a distance of more than 30 miles.

He was also an innovator of ocean vehicles and lifeguard rescue equipment. Some of his lifesaving creations include soft rescue tubes, all-fiberglass hollow boards, and foam/plywood/balsa sandwich surfboards.

Blake and Peterson exemplify the Waterman tradition now being honored by Santa Monicans working together to bring paddleboard racing back to Santa Monica and the Pier. The race and festival are organized by a long and well-known list of Santa Monica community activists, business owners, lifeguards, and members of the Harbor Patrol.

These Santa Monica locals see the Pier as a wonderful venue for events, and want to have more community events on the Pier that tie in with the experience of the ocean.

The 2011 Pier Paddleboard Race and Ocean Festival celebrates the Waterman tradition, the magic of the ocean, and people coming together to have a grand time. Register to be one of the racers in either the 2- or the 5-mile race. Cheer the racers, meet Kathy Kohner-Zuckerman, the woman who inspired the “Gidget” movies and Esther Lopez Maier, winner of the 1947 Championship Race. Listen to the FuDogs, be an environmental steward and bring your own, reusable water bottle, and get it filled at the Pier, and continue the spirit of the Watermen.

By mirrormmg May 15, 2011
in Opinion
Related Posts