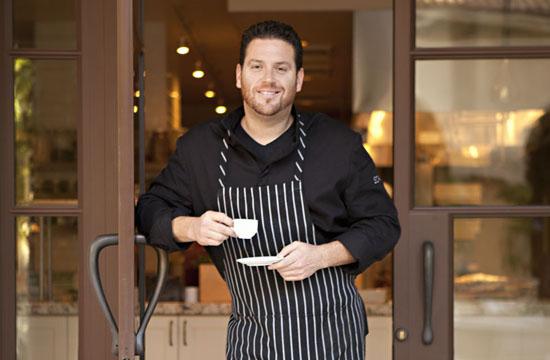 When award-winning chef Scott Conant opened his Scarpetta restaurant in New York’s chic Meatpacking District in 2008, it received three-star reviews from The New York Times Magazine and New York Magazine. Both publications selected it as one of the top 10 new restaurants to open that year. It was also named one of the Best New Restaurants in America by Esquire magazine. The Miami Beach location scored a four-star review from The Miami Herald, and in 2009 both restaurants were included in Travel and Leisure magazine’s 50 Best New U.S. Restaurants. Other Scarpetta restaurants are located in Toronto and Las Vegas.

Late last year, Conant brought his special culinary skills to the luxurious Montage Beverly Hills, where he opened yet another Scarpetta (which means “little shoe”). Housed in a beautifully designed rustic room, the new location has soaring windows and unfinished dark wood floors with adjacent al fresco dining. The dishes are described as soulful and seasonally inspired, rooted in Conant’s heritage and time spent in Italy.

After a tasting, the Mirror sat down with this young, exciting chef for an exclusive interview that has been edited for print purposes.

When did you first start cooking?

Scott: I first started cooking when I was a kid at around 15. I went to a vocational school in Connecticut where I grew up. Basically, what happened was that I wanted to be a plumber but couldn’t get into the program, so for my second choice I chose culinary arts. But I still wear my pants like that some times (laughs). (Still joking) The people in the kitchen are disgusted by it. Seriously, simultaneously, when I was taking classes, I started working as a dishwasher at a French restaurant and after a few months I became a prep cook and starting moving up the food chain. Cooking came very naturally to me and I was good at it. I played a lot of sports as a kid and I found the camaraderie in the kitchen was the same as when I was on a sports team, and I think that’s what resonated with me initially.

Who were the cooks in your family?

Scott: Both sides of my family cooked. My mother is first generation Italian American and her family is from a small town northeast of Naples. My father grew up on a farm in Maine, so we’ve all been pretty food oriented and have a lot of respect for food. It was a culture that I grew up in.

Is your cooking different from the way your parents cooked?

Scott: They didn’t cook the type of food that I cook and didn’t have this wonderful kitchen. As a matter of fact, I’ve never had a kitchen like this.

Did you ever think you would achieve this fame and recognition for your work?

Scott: I don’t see it like that. I think we’ve achieved a certain level of success, but I still feel like the underdog. Every time I want to accomplish something I feel like I have a huge upward battle. A lot of times Italian food is a little misunderstood, so I always feel it’s my obligation to really make it understood.

In what respect do you feel like an underdog?

Scott: In the sense that I see chefs like Thomas Keller and Wolfgang Puck and look at the business they do and the notoriety and fame they’ve achieved. There are four restaurants right here (referring to the golden triangle in Beverly Hills) and you don’t have to look any further than Maestro’s, which is one of the busiest, most successful restaurants in the country, to know that I haven’t come anywhere near that level of business yet.

This is Saturday night and you’ve been packed all evening. How do you do the rest of the week?

Scott: What we’ve managed to do, fortunately, is to concentrate on the amount of business we’re doing so I don’t want to be extremely busy or overwhelmed. For me it’s never about the short dollar – it’s about the long dollar. I’m not interested in blowing ourselves up after a short time because we couldn’t handle the business and have managed to alienate customers. The real goal and overall intention is to create relationships and that’s what I mean about the long dollar – to make good money over the years. That has to be our goal. But knock on wood, we’re turning people away.

How do you come up with new dishes?

Scott: I have a great team and I always say it’s not just “me,” it’s “we.” We, as a group, come up with dishes and we ping pong ideas around. A lot of the guys will come up to me and say, ‘Chef what do you think about this?’ We’ll use different ideas as a starting point and if it doesn’t work, we just scrap the idea and start all over again. There’s a million directions and we try to take it all in. We’ll often tweak a dish over time and try to simplify the flavors and textures, but every flavor is singular and must be harmonious.

Do you think about cooking when you’re falling asleep at night?

Scott: No I don’t. I think about all the things that are wrong and what we have to work on to improve (laughs). So, I have a hard time sleeping. We’ve opened five restaurants in different cities and that’s a lot of work. I also have a wife and a baby at home. So it goes without saying that I have a ton of things on my plate and when something falls short, and I get a complaint that a dish is less than inspiring, I’m not happy.

What is your overall philosophy?

Scott: I want the food to be such that the customer will use a piece of bread to sop up everything on the plate, and if a dish goes out of the kitchen that doesn’t inspire people to do that, then I’m not doing my job properly. We’re only as good as the last dish we put out. I tell my guys that we’re only as good as the worst dish we have. It’s as simple as that because people are going to focus on the negative elements, not only on the positive. We have to be honest with ourselves all the time about where we stand, so I try to act as a coach to motivate and elevate my team.

What is the biggest overall challenge with your food?

Scott: Not only does the food have to be consistent in its quality, but it has to be consistently soulful. It’s one thing to have a dish that’s perfect all the time, but a lot of times a dish could be executed perfectly, but lack the depth and soulfulness that you really need. Sometimes a soulless dish is worse than a dish that’s well prepared, but ordinary.