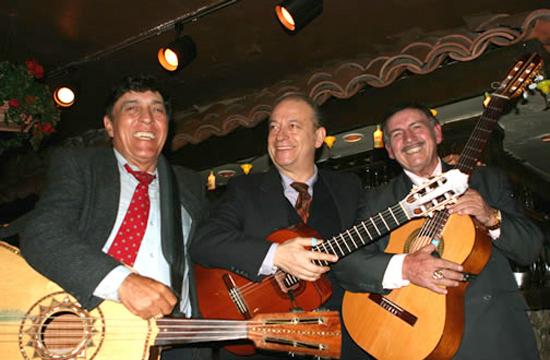 Westsiders who love Mexican food know about La Cabana. The restaurant has been around since 1963, owned by Nina and Carlos Haro, and is fabled for its authentic cuisine, homemade tortillas, a wide selection of margaritas, and a 3 a.m. closing time that makes it a perfect late night get-together choice.

Located just off Lincoln Boulevard, La Cabana is a white washed building with tile trim, made to look like a “cabana” or thatched roof hut typical of Mexico. The interior is dark in a nice retro way, with comfortable booths and a patio out in back, where diners can enjoy their drinks and guacamole made tableside.

La Cabana claims to be the first Mexican restaurant on the Westside to make its own tortillas. At certain times of day, a woman can be seen sitting in the back of the restaurant’s main room, slapping the corn masa dough on to a flat griddle or comal, turning the tortillas with her hands. La Cabana’s tortillas are thicker than most -they feel like warm hand towels but they certainly taste much better. The thickness of the tortillas helps when using them to scoop up refried beans, guacamole, or the dark red house salsa, which has a delayed but definitely spicy impact.

The menu features many specialties that are not as well-known as tacos or enchiladas, such as soft tacos, made with two thick tortillas and served with rice, beans, and additional tortillas. In addition to Tacos de Carne with beef, there are Tacos de Pollo Asada with bits of roasted chicken, seasoned and mixed with shredded cabbage.

A quesadilla is a cheese-filled tortilla dish that uses a wheat flour tortilla. La Cabana offers, as chef Carlos Haro notes “a dozen different quesadillas . . . with an original array of fillings such as our spinach and shrimp quesadilla and our zucchini and corn quesadilla.” Other fillings include Pancho Villa (cheddar cheese and diced potato) and El Amuado (smoked salmon and avocado).

“Guisos,” or stews, include chile Colorado (somewhat like chile con carne, but served in a red mole sauce), chile verde (made with green chile salsa), and steak picado (chunks of beef in a seasoned sauce). The regular soups include Sopa de Albondigas (a comforting meatball soup featuring a couple of savory meatballs mixed with veggies), and on weekends, cocido (a beef-based soup) and menudo (the classic tripe-based soup).

Also notable are the seafood creations. Pescado Veracruzano is a red snapper cooked “Veracruz-style” with a chopped tomato, onion, and caper sauce that complements the flavor of the fish without overwhelming it. Camarones Eduardo is a dish of shrimp cooked in chipotle sauce. Every fast-food restaurant in America pushes chipotle now, but La Cabana’s chipotle sauce beats them all.

Of course, some come just for the margaritas. La Cabana claims to have unearthed the “original” recipe, created in 1948 in Acapulco by Margarita Sames. This drink is made with two or three parts tequila to one part Cointreau (an orange-flavored liqueur). The drinker is given a shaker and fresh limes to make the drink with, and the shaker can be kept as a souvenir.

If that isn’t enough, the dessert menu offers a chocolate cake with a chocolate pudding filling and a very tempting flan.