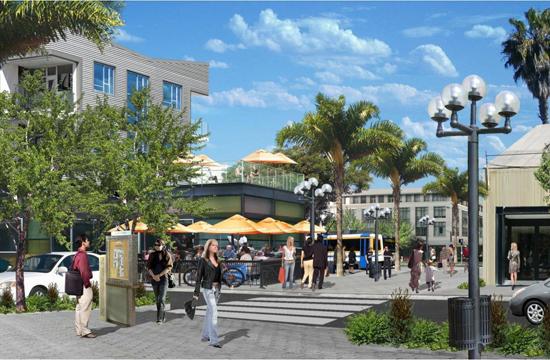 City officials in Santa Monica boasted the reception of a $652,000 grant toward plans to develop the Bergamot Station industrial area into a thriving artistic community along the path of the approaching Exposition Light Rail transit system.

United States’ Housing and Urban Development (HUD) Secretary Shaun Donovan toured Bergamot Station on June 2 after his department awarded the grant to Santa Monica. Donovan mentioned that for every HUD grant, there were ten applicants. Santa Monica’s project stood out because of Bergamot’s interweaving with the Exposition Light Rail (Expo) will, as he said, “Create a mixed income community… that will connect families not just to economic opportunity but also to downtown Los Angeles, West Los Angeles, Culver City, and other major job centers around the region.”

Santa Monica’s recently adopted land use regulations call for Bergamot station to developed into Bergamot Transit Village, with a vision that includes the transformation of the current large land parcels – which lack the more convenient urban street grid pattern found throughout the rest of the city – into a grid network of connections and pathways that can be used by cars, bikes, and pedestrians. Also called for are housing opportunities, local-retail serving uses, creative arts uses, consolidated parking, and transportation demand management programs.

Francie Stephan from the City’s planning department said the City hopes to complete the plan in less than two years so it will be complete before the light rail comes to town in 2015.

“This plan will also align closely with the strong vision in your Land Use and Circulation Element plan to lower green house gas emissions for this community by 2030, reduce this community’s reliance on automobiles, and improve the health and quality of life of Santa Monica families,” Donovan said during the tour.

Santa Monica Mayor Richard Bloom was also on hand. He told the secretary that Santa Monica will collaboratively drawing on its strong and talented City staff and its uniquely engaged citizenry to complete the project.

“We expect our plan to become a model for the region and hopefully beyond for an integrated, comprehensive, transit oriented planning,” Bloom said. “Forty-three percent of the folks who live in Santa Monica are somehow engaged in the arts so this is going to be a central focus for our entire community. This area has a large portion of Santa Monica’s creative economy.”

Donovan stressed that these planning grants are a different kind of approach by the federal government. “This is about helping you build on the strengths in your community – not bringing a federal vision but saying what is authentic about this community. Clearly, the importance of the arts is your central pathway to creating jobs. The places that are going to be economically competitive in the long term are going to be those that create great places that attract creative capitol. That is a key thing we recognize through these grants.”

Donovan noted that in addition to direct financial perk of the grant, it also gives the Bergamot project a preferred sustainability status and therefore makes Santa Monica eligible to receive other federal resources for implementation of plans that connect neighborhoods with public transportation.

These grants stem from President Barack Obama’s call for long-term approaches to solving the energy problem in this country. “Part of the challenge is not just solving the short-term pain at the pump that we feel but the long term issues,” Donovan said, such as smarter community planning. “The average family spends 52 cents out of every dollar they earn on housing and transportation and that was before gas prices went up above $4 per gallon.”

Donovan continued by pointing out that it costs five times as much to move goods around metropolitan areas as it did 25 years ago, while wasting finite fuels when alternatives are available.

“These are fundamental challenges to not just individual families trying to make ends meet,” he said, “but to our broader economy, this region, and the country as a whole.”