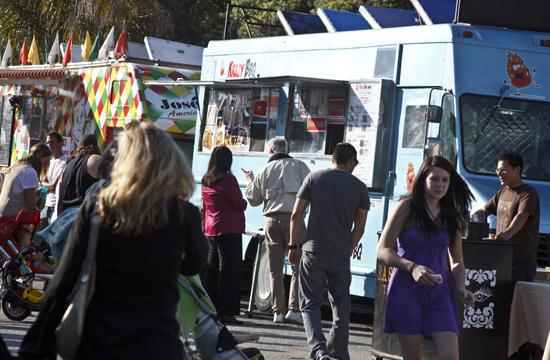 Santa Monica’s city council has a full plate at its upcoming June 21 meeting, perhaps the largest portion of which deals with the future of food truck regulation in the city.

For more than half of a year the office of Santa Monica’s housing and economic development has studied the popular Tuesday night food truck lot on Main Street where vendors have operated using temporary permits. Based on this study, staff members have recommended that Santa Monica create some sort of permanent permitting mechanism for food trucks to operate.

Food trucks have had a storied history along Los Angeles’ Westside. Some consider the epicenter of the Los Angeles food truck phenomenon to have radiated along Abbot Kinney, where the mobile cuisine vendors gathered to pack the streets on the first Fridays of every month. But those trucks operated along the boulevard, which is a public street, whereas the Tuesday night food truck lot in Santa Monica is on private property.

Regulating public street code is a matter of state law. Any change of which would have to affect food trucks and commuter vehicles alike, leaving local municipalities only minor specific enforcement flexibility – mostly related to public safety issues. Perhaps the strongest regulatory ammunition requires all stopped mobile food facilities conducting business for more than one hour to operate within 200 feet of an approved, readily available and fully functioning restroom facility. If the restroom is within a business, a food truck operator must have written permission from the business owner for use.

Beyond this regulation, Santa Monica staff suggest the possibility of shrinking parking space sizes, restricting hours, and even lobbying the state government to change laws to allow municipalities more freedom to regulate food (and other vending) truck operations on public streets.

“Businesses in Santa Monica have complained that these trucks block visibility to their stores and create unfair competition,” states the City’s report prepared by housing and economic development. The staff report also suggests the possibility of designating special food truck vending spaces along streets, but notes that it would not prohibit trucks from parking elsewhere.

But when food trucks operate on private property, where they can band together to attract customers by offering more selection, Santa Monica and other cities have much more control to regulate through zoning restrictions.

“We believe that allowing (food trucks) on properly located private property, subject to regulations that are in the public interest, is a very good idea,” Howard Krom told the city council on Jan. 19, 2010. Krom was speaking as an attorney for Steve Taub, who was the owner of the private lot on Santa Monica Boulevard and 14th Street. Taub’s property was not only the first location of a food truck lot in the city, it was also the first to be shut down – after only one day.

“We believe it would allow for more regulated, and better regulated food service from food trucks than presently exists on the city’s streets, where trucks operate without City oversight, ” Krom said, referring to the argument that lots keep food trucks from parking in front of restaurants.

In September 2010, a maximum of 10 trucks were given temporary permission from the City of Santa Monica to gather each Tuesday evening in the parking lot behind the California Heritage Museum and the Victorian on the corner of Ocean Park Boulevard and Main Street, where the Sunday morning farmers’ market also takes place. Food-vending trucks regularly operate in a number of other off-street locations throughout the City, including Santa Monica Business Park and Bergamot Station. The City also granted a temporary-use permit for a weekly food truck event at 14th Street and Santa Monica Boulevard lot, but that permit has not been executed.

During this trial period, City officials have watched for possible adverse impacts on the surrounding neighborhood such as noise, litter and traffic, while at the same time trying to draft proper zoning that would allow for food trucks to operate in a safe and regulated manner in the city.

“Most people seem to feel the Tuesday test at the Heritage has been a huge success, and I’m already hearing from other locations where a regular food truck event could be a helpful fundraiser for institutions in distress,” City Council member Kevin McKeown told the Mirror in an e-mail. “We’ll need to balance food, fun, and fundraising against neighborhood impacts and whether more food trucks will hurt existing restaurants, but so far the excitement is positive and the complaints have been scarce.”

The Southern California Mobile Food Vendors Association, whose more than 100 members rotate at the Tuesday Main Street lot, also sprang from the ashes of the first failed food truck lot on Santa Monica Boulevard. Vendors lease the lot from the California Heritage Museum, the proceeds of which have kept that entity from financial hardship. In exchange for exclusive use of the lot, association member trucks agree not to park along Main Street, avoiding direct competition for customers with established restaurants…

“… which is what we prefer,” said Tobi Smith, director of the Heritage Museum. “We are part of Main Street, and we want to be a good neighbor.”

Smith not only sees the food lot as a fundraiser for her museum, but she and other proponents also argue that the influx of the Tuesday crowd trickles over into other Main Street businesses. The City’s survey found that although the Heritage Museum food truck event is what brought responders to the area on Tuesday nights, food truck customers do visit other Main Street businesses before or after eating at the food trucks and they return to patronize them on other nights.

But not everyone agrees with this finding.

“Tuesday nights are dead,” said Ron “Captain Ron” Shur, owner of the Galley on Main Street, considered Santa Monica’s oldest restaurant. Shur said that since the food truck lot opened, parking lots west of Main Street have been too full, and business has suffered. He said his servers are now avoiding working the Tuesday shift.

“Unfortunately, the financial impact on storefront businesses cannot be ascertained through sales tax information as that data is available only on a monthly basis,” notes the City’s report.

“We’re all hoping that something works for all of us,” said Steven Trager, owner of Wildflour Pizza on Main Street, which shares the customer demographic of the food trucks. Of the patrons surveyed by the City, 67 percent were under the age of 40, and 33 percent were between the ages of 21 and 30. According to the City’s report, food truck customers indicated they spend $20 or less during each visit. This price point competes with many of the Main Street restaurants as 13 of the 16 restaurants surveyed reported that their average meal rate was under $20.

Trager said Wildflour Pizza’s Tuesday night business has been more or less the same since the lot opened. When the Main Street lot was proposed to him and other owners, the idea was that it would increase business, which Trager said he hasn’t seen. “The key for this thing continuing is those people need to continue down to other businesses,” said Trager. “If that doesn’t happen, I can see this not continuing.”

The City’s trial period for temporary permitting of food trucks was conducted during a time of year marked with cooler and sometimes wet weather. One thing both Trager and Smith from the museum could agree on was a hopeful outlook that if the summer brings warm weather, the food truck lot could deliver customers to Main Street.

Smith said that better weather and expanded permitting could bring more trucks, longer operating hours, and even the addition of other days in the week in which to operate trucks, although she seemed hesitant to expand too much.

“I don’t think you could do this every night,” said Matt Geller, a Venice native and vice president of the SoCal Mobile Food Vendors Association. When asked about other lots, Geller said the Main Street lot is a hard-to-repeat perfect storm, with the patio of the Victorian, its bar, sanitary facilities, bike valet, the lawn of the museum, and the location all combine to make for a self-contained community gathering.

Should the council approve city-wide conditional permitting, Geller predicts other lots would blossom, but would be more private than Main Street’s Tuesday gathering. Instead, he expects to see smaller lots with just a couple trucks coming to service businesses during working hours.

More than 150 food-vending trucks are currently licensed in Santa Monica. To operate, mobile food trucks pay $50 for a business license, $25 for a police permit, $107.16 for fingerprinting, and $25.83 for fingerprinting processing, for a total of $207.99 for a new permit or $100.83 for renewals. Mobile food operators must also pay for a Los Angeles County Public Health Permit, a monthly charge for a parking space at a commissary (where health regulations require that a food vehicle be stored, cleaned, and serviced every day), the capital costs of a kitchen-equipped vehicle, which can range from $30,000 for a used vehicle to more than $100,000 for a new one, and maintenance costs. Mobile food truck operators are responsible for paying sales tax on the revenue they generate in each municipality where they operate.

“I do expect the Tuesday night market to continue, but other days and places are uncertain,” Mayor Richard Bloom told the Mirror. “Each needs to be considered on their own merits, using criteria.”

In considering zoning regulations on private property, the City could specify location restrictions, number of trucks and patron capacity, signage restrictions, noise impact, parking availability, mandate a bike valet and other amenities including lighting, security, restrooms, and regulate frequency of the event. And, along with requiring permit and other fees, the City could even ask venders to provide community benefits, such as support of a local non-profit organization.

While the council contemplates regulation for food trucks – operating along the streets or on private property – the staff report recommends extending the Tuesday Main Street lot’s temporary-use permit until overall decisions are made.

The food trucks operate from 5:30 to 9:30 p.m. on Tuesday nights at the Heritage Museum parking lot located at 2612 Main Street. The Santa Monica City Council’s meeting on June 21 will begin at 5:30 p.m. at the City Hall chambers at 1685 Main Street.