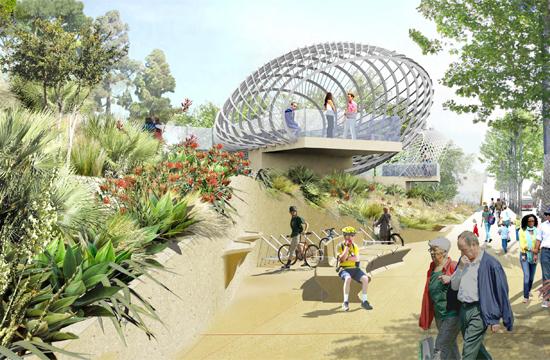 The Planning Commission believes the Palisades Garden Walk is a welcome addition to the City of Santa Monica, but its counterpart park, the Town Square on the steps of City Hall, were not so welcome. Whether the city council will have a similar response to the planned park’s arrival remains to be seen.

Less than one week before Palisades Garden Walk makes an appearance on the city council agenda, the Santa Monica Planning Commission discussed the merits of the park’s design at its special meeting held on June 8. Though it did not make any formal decisions Wednesday, the commission did provide feedback for the council’s June 14 meeting on evolution of Palisades Garden Walk and Town Square designs.

Grace Phillips, who is a member of the Urban Forest Task Force but spoke on her own, said the Palisades Garden Walk project was “a really wonderful example of design evolving through public process.” Just the same, resident Linda Avila, another member of the Urban Forest Task Force who also spoke on her own, indicated she was pleased with the designs for Palisades Garden Walk. She could not extend her enthusiasm to the Town Square project, however.

The Planning Commission’s agenda set the tone for the meeting, as commissioners considered whether both Palisades Garden Walk and Town Square met its minimum aesthetic standards prior to making any recommendations to the city council to move forward with design plans.

Commissioners focused on ensuring the designs for both projects ensured “multiple functions and safety at all hours,” as well as maintain their respective roles as “a unique, sustainable destination while serving as a vital pedestrian circulation element of the civic center for a diverse community.”

Of course, while commissioners are looking forward to the development of Palisades Garden Walk, the council may not be so quick to their side in support considering the park’s $46 million price tag. During the council’s three-day budget workshop sessions just before the Memorial Day holiday two council members questioned whether the $46.1 million in redevelopment funds allocated to the project was too high, especially in light of potential cuts by the state of RDA funding.

Still, commissioners agrees with the public that the six-acre Palisades Garden Walk project was well-designed and would be a welcome addition to the Civic Center.

Planning Commission Chair Jim Ries said Palisades Garden Walk design was “fantastic” and would be a perfect place for him and his son to use one of the park’s slides if it was “built soon enough.”

Amidst the raves, there was one specific complaint expressed by Commissioner Ted Winterer, who was worried about whether there were any safety precautions for one of the park’s key features, an overlook cage. Winterer was considered whether the overlook cages would be an inviting hazard for children. Easing his concerns was Miriam Mulder, an architecture services manager with the City, who stated there are plans in place for railings and other safety measures.

If only the Town Square had it so easy.

A plan intended to beautify and modernize City Hall and the civic center area, commissioners were not to thrilled with the Town Square designs. Now in its fourth version, the design spawned by James Corner Field Operations garnered a reaction by commissioners that was almost a 180-degree shift from what they said about Palisades Garden Walk.

Gerda Newbold, the commission’s chair pro tem, said the design was “cold and hard,” adding she believed it would not age well and was not very efficient with land use and space. One big issue was the planned removal of Juniper trees, which, if executed, Avila believed would send a hypocritical message about the City’s message on sustainability.

“I do support retaining the six existing Juniper trees in addition to the Bunya tree and the Windmill Palms,” Avila said moments after expressing her approval for the Palisades Garden Walk designs. “We pride ourselves on being a sustainable city. As such, it only makes sense to conserve healthy drought-tolerant trees that are already in places, such as the Junipers.”

The design plans indeed call for the removal of various trees to expose more of the City Hall structure, as well as for the addition of an aquatic element running the perimeter of the rose garden decorating the heart of the civic center grounds.

Also featured in the design plans are planters and benches, which were among the commissioners’ chief concerns. Described as lackluster or inefficient designs for both the benches and planters; the removal of the trees would virtually eliminate shade areas was also an issue.

With no formal action was taken at the meeting, the comments and concerns raises by the commissioners will be forwarded to council for consideration at its June 14 meeting. There, council members will review the design development plans for both Palisades Garden Walk and Town Square. If the council members like what they see, they may “approve the recommended design direction” and “direct staff to move forward with construction documents.” Additional “refinements” to the designs may be made to the approved plans, if necessary.

“It seems like a rather extravagant number,” Shriver said of the $46.1 million project during a discussion about redevelopment priority projects. “Even though it is an amenity for the region, I think perhaps the extravagance of it isn‘t exactly what redevelopment was intended for. We have an opportunity to create something that this community will cherish for maybe generations to come. ”