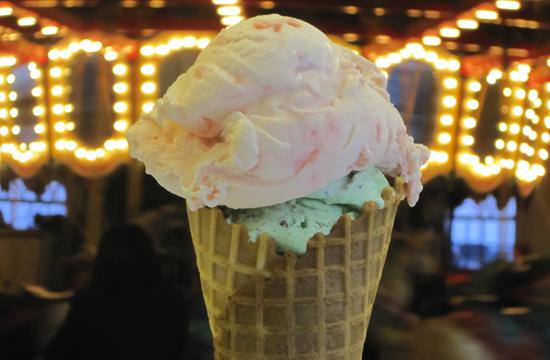 When the temperature rises, nothing chills you down from the inside like a cool, creamy ice cream. In Santa Monica we have not only the big chain dip shops like Ben and Jerry’s, Coldstone Creamery, and Baskin Robbins, but we also have some independent local shops that are full of local flavor. We got the scoop on a few of them:

The first thing that hits you when you walk into Sweet Rose Creamery is the sweet, comforting aroma of cream and sugar. That’s because everything – the ice creams, sorbets, cones, sauces, and toppings – is made daily here from scratch, including the marshmallows, the chocolate chips, the vanilla and chocolate waffle cones, the brownie bits, the hot fudge sauce, the caramel, and the peanut butter. All this makes for dense, artisinal ice creams and sorbets that have intense, concentrated flavors.

“We use all organic milk, eggs, cream, and sugar; we crack and separate our eggs by hand. We try to source locally, and about 85 percent of our ingredients come from the Wednesday farmers’ market,” Shiho Yoshikawa ice cream chef said. The mint chocolate chip ice cream, for example, is made from fresh mint leaves from the farmers’ market, mixed in with a blend of three types of chocolate that’s hand-cut into differently sized chips so that some are crunchy and some melt in your mouth.

Twelve to 18 flavors of ice cream and sorbets are made daily, depending on what’s in season and what’s at the Wednesday farmers’ market. In the summertime, there are more fruits at the markets and thus more flavors. “We’re beginning to have stone fruits, nectarines, and peaches, and our first batch of peaches and cream ice cream sold out quickly. We’ll have an oven-roasted apricot sorbet soon. When it’s hot outside I want something cleansing, and jasmine lemongrass sorbet is a summery palate cleanser that’s not too heavy,” Yoshikawa said.

Sweet Rose Creamery is the third store of Santa Monica natives Zoe and Josh Nathan, who also own Rustic Canyon Wine Bar and Huckleberry Cafe on Wilshire Boulevard. Yoshikawa is a native of Nagoya, Japan who came to the U.S. as a teenager in pursuit of an education in sculpture and installation art. She’s an alumnus of the acclaimed Tartine bakery in San Francisco.

Robert DiDio is still making the lemon Italian ice that he learned to make from his grandfather while growing up in Philadelphia.

“In the summertime, Southern Italian immigrants in the east coast made lemon sorbetto, or Italian ice,” DiDio said. “They started making them on Memorial Day, and the ices would disappear by Labor Day. In Philadelphia, they called them water ice.”

DiDio makes the ices daily in his shop, creating more than a dozen seasonal flavors like blood orange, cantaloupe, honeydew, and pomegranate – but the lemon ice is not to be missed. There’s also a small selection of gelato and frozen yogurt for those who like dairy in their frozen treat. The shop has a collection of retro candy – dots on paper, Clark bars, Bonomo Turkish Taffy – “all candies from when I was a kid,” said DiDio, who retired from the garment industry 18 years ago.

This small neighborhood shop gets busy when the neighborhood schools let out, and people also come from all over town for the ices, DiDio said. Di Dio’s Italian Ices will celebrate 15 years on Montana Avenue in September.

Soda Jerks on the Pier

Ice cream sundaes, shakes, malts, ice cream sodas and phosphates are made the old fashioned way at Soda Jerks, a traditional 1920s-style soda fountain inside the landmark carousel building on the Santa Monica Pier, where owner Kevin McCafferty has found a perfect spot to carry on a proud family tradition of soda jerking.

Third-generation soda jerk McCafferty is an antique collector and knows his history. “I appreciate the carousel building and how the city of Santa Monica has preserved it. I give our customers tours and talk about the history of the soda fountain, the carousel, the horses, how old they are, and the history of the pier,” he said.

Soda jerks outfitted in white shirts and black bow ties hand-pump the sodas, which means they pour soda water out of a refurbished soda fountain, mix in the syrup and use crushed ice, not ice cubes, all precisely according to the original Coca-Cola fountain recipe. They use Fosselman’s ice cream, an Alhambra-based family owned company that began making ice cream at the same time the carousel building was built. The shop’s vintage fountain and equipment are a tribute to the American craftsmanship of the early 1900s.

The 50-50 Shake is named in honor of former Santa Monica Mayor Ken Gensler. “He was one of two Santa Monica councilmen who pushed for us but he passed away before we opened last July. We wanted to honor him, but we never met him, so we sent emails around the city asking people who knew him and came up with a milkshake that’s half orange sherbet and half vanilla ice cream; a perfect combination of bitter and sweet, the way people described him. It’s our ode to the mayor,” McCafferty said.