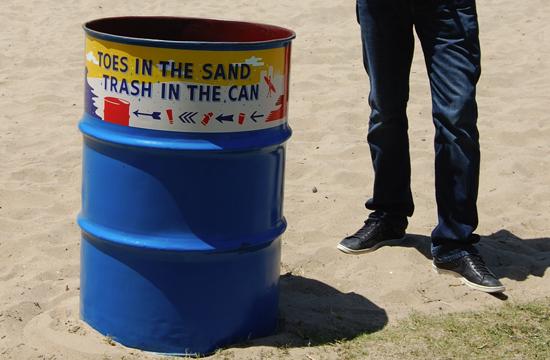 There are 500 new “smart” trashcans spread throughout the Santa Monica coastline. While these trashcans are not smart enough to pick up litter on its own, they can update you on just about everything happening within a few feet of your location at the beach. All of this can be done on your smart phone, thanks to the Santa Monica Beachcast and a QR code.

In a joint effort between Heal the Bay and the City of Santa Monica, the nearly 5-mile stretch of beach between Santa Monica Canyon and Venice Beach is now populated with new blue trashcans with colorful artwork and a QR code “linking smart phone users to the new Santa Monica Beachcast.”

At the top portion of the new blue trashcans there is a QR code box, compatible with most smart phones. A smart phone user can aim their smart phone’s camera at the QR code box, which scans the code, and within moments the phone’s web browser connects to the Santa Monica Beachcast.

Once on the Santa Monica Beachcast, a smart phone user can check the latest Twitter updates for the surrounding community, have immediate access to emergency contacts beyond 911, stay informed on tips on how to keep the beach clean, stay abreast of the latest surf or weather conditions in their immediate area, read the most recent beach report cards, and even volunteer for Heal the Bay’s beach cleanups.

“We’ve got a trash can on the beach, we have an opportunity to really try to grab the public with a really fetching message,” said Andrew Masmajian, the communications coordinator of the City’s Office of Sustainability and Environment. “This is the smartest beach (trash) can in America today. It’s a smart phone app you can scan from the sticker itself. The whole idea is to create a community.”

In addition to education and information, the Santa Monica Beachcast also has a little bit of entertainment in the form of a photo gallery, an interactive feature highlighting snapshots uploaded by fellow beachgoers who have taken their favorite pictures near the smart trashcan.

“The goal of the interactive gallery is to highlight the beauty of the beach and, in turn, provide the community with a stronger sense of pride and connectivity to the beach and each other,” Heal the Bay said in a statement.

With the trashcans officially debuting over the Memorial Day weekend, Heal the Bay spokesman Matthew King said the interactive trashcans are an ideal way to involve the community without playing the role of big brother.

“Instead of just lecturing people all the time (not to litter), we wanted to create something that is a little more interactive so that people are able to engage a little more and be more thoughtful about (the beach and the surrounding environment),” King said. “It also provides some value, where there is some information that we are giving back to people.”

Officials for both the City and Heal the Bay hope the new initiative will help reduce the amount of litter found on local beaches daily, as it is considered by many as “the wild open” and a national park.

“Our beaches are wild open space, as famous as any national park, and protecting them is one of our highest priorities,” Dean Kubani, director of the Office of Sustainability and the Environment, said in a statement. “This collaborative effort puts an exciting new twist on the vital public works infrastructure we provide every day to ensure that we ‘keep it out of the sand.’”

Advertising firm DDB LA worked together with Heal the Bay and the City in establishing the smart trashcan campaign, which was initiated about four months ago.