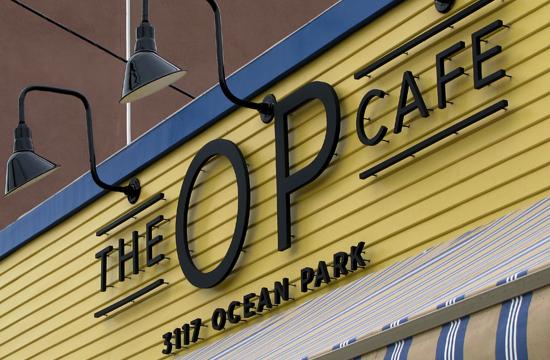 It’s a hidden gem nestled on Ocean Park Boulevard at 31st Street in the Sunset Park neighborhood of Santa Monica, along the city’s southern border. Known more to locals than anyone else, The OP Cafe celebrated its fifth anniversary and new digs on May 22.

In a re-opening of sorts, the event served as a highlight of all things new at the OP Cafe, including a preview of the revamped menu to be made available on today. Proprietors Mark and Lani Verge purchased The OP Cafe in the mid-90s and recruited Chef Fanali to recreate the family-style supper menu, which will be featured at the neighborhood cafe every Sunday throughout the summer from 5:30 p.m to 8:30 p.m., and includes fresh homemade spaghetti, traditional (veal, pork, beef) meatballs, old school tomato sauce (fresh tomatoes, olive oil and fresh basil), baby spinach salad with grape tomatoes, shaved parmesan Reggiano with Meyer lemon vinaigrette, hot baked Italian bread, and Fanali’s coveted and quickly consumed housemade meatball sliders.

Fanali grew up learning the art of simple healthy cooking at his family’s home-style luncheonette in the New England hamlet of Bridgeport, Conn. There he cultivated the tradition of choosing from only the freshest produce available, the highest quality ingredients, and allowing flavors to marinate long enough to bring out the best in the classic American fare and ancestral recipes that nourished his old neighborhood.

Now residing in Santa Monica, Fanali is said to love food almost as much as he loves his wife Sylvia and his young daughter and son. Fanali’s creativity is expressed in the house-made marinades, vinegars, relishes, and sauces. His love of fusion dishes can be found in the bites of the Korean beef rib tacos, the blended spices of the pulled pork sandwich (smoked low and slow for eight hours), the Southwest seasonings of the Sante Fe wrap, and his spicy wakeup call — aka the Diablo breakfast burrito.

Artist and muralist, TMAC, created the interior and exterior signage and hand-lettered chalkboards, inspired by The OP’s brand ID designed by Derrick Sun, and conceptualized by strategist Joan McCraw. The facade was transformed with the addition of a parapet and novelty wood siding mirroring the look of Santa Monica’s early arts and crafts bungalows, vintage lighting and striped awning that extends the length of the cafe. Kline used sustainable lumber throughout. Yellow, gold, gray, navy and Pacific Ocean blue beach colors punctuate the design.

Native to Santa Monica, Westside Rentals founder Mark Verge grew up in the footsteps of his father, and his father’s father before him — as did his brother, historian Arthur Verge — who had all spent time working at the beach serving as Santa Monica lifeguards He married Lani, his high school sweetheart, and he’s still crazy about her. He eats at The OP nearly every day. So do his children, his parents, and his childhood pals, several who are also his partners in entrepreneurial ventures that run the gamut from specialty cocktail bars to hotels and race horses, all outgrowths of the highly successful Santa Monica based Westside Rentals by the Verges founded in the mid-90s.

To preview the menu and place your advance order online, please visit theopcafe.com