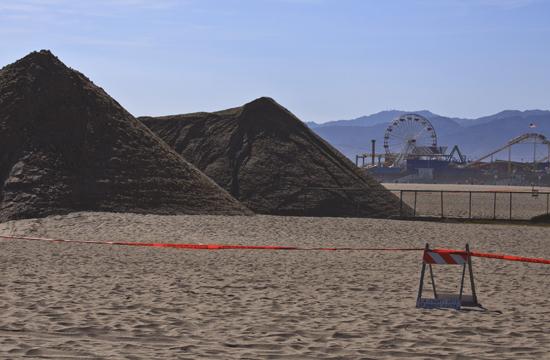 At the far west end of Pico Boulevard, just beyond where an asphalt turnaround meets Ocean Front, a pair of “sand pyramids” at least 20 feet high bracketed a moderately wide channel bisecting the lower half of Santa Monica Beach between the pier and Ocean Park. The channel is attached to the Pico-Kenter drain, a major storm drain collecting rainwaters from the Los Angeles basin, often blamed for a variety of environmental toxins in the area, and a recipient of poor health grades issued by the Los Angeles County Department of Public Health.

With the official onset of summer about two weeks away, it was the flood control division of public works that flattened the two sand hills on either side of the channel at the end of the Pico-Kenter drain. The hills were originally erected in the winter to make way for storm runoffs during the rainy months.

According to Neal Shapiro from the City of Santa Monica’s Office of Sustainability and the Environment, the public works project to flatten the sand piles and allow a thin segment of land to be used by the beach-going population during the peak of summer is standard operating procedure performed at the end of every rain season.

It is a time-consuming but necessary process, Shapiro indicated; the redistribution of sand required more than a week and several tractors to complete.

Mark Gold, president of Heal the Bay and chair of Measure V (the Clean Beaches and Ocean Parcel Tax), told the Santa Monica Mirror that the Pico-Kenter drain is an essential public works project, and there are plans in development to improve its efficiency in capturing trash at Santa Monica’s Urban Runoff Recycling Facility (S.M.U.R.R.F.) and allow cleaner water to flow out from there as part of its dry-weather runoff.

Until then, the public works project to flatten the piled up sand surrounding the Pico-Kenter drain runoff area at Santa Monica Beach will block potential dry-weather runoff during the summer and early fall months. When the first rainstorm returns either at the end of 2011 or at the beginning of 2012, the sands blocking the Pico-Kenter drain will be pushed aside again to allow for extra give in water runoff.

While nothing has been finalized yet, Gold said there are three plans being considered, and it will be at least six months before anything is even considered or implemented, which is just in time for the next winter season.

However, Gold said, and Shapiro confirmed, “there are no plans to shut down the drain” entirely.

One local resident was weary of officials potentially paying lip service, stating that she has kept her eyes on the Pico-Kenter drain runoff area for about four decades.

Louise Steiner, a 32-year resident of Santa Monica, has lived near the Pico-Kenter drain and has watched suits, officials, and construction works toil in the area for as long as she can remember. She said promises were constantly made to improve the efficiency of the Pico-Kenter drain, but no substantive progress seems to have been made.

“I’m a little skeptical. I’ve been watching this for 32 years and there aren’t any projects that seem to work. Mother nature seems to have its way,” Steiner said, questioning whether the drain’s purification process is functional.

Steiner said the drain has not been properly operating since the 1980s; she was previously told the Pico-Kenter drain could not handle the excess water and it still ended up in the bay in its polluted state.

“I’m just worried Santa Monica taxpayers will be stuck with another boondoggle,” she added. “We’ll see when the next rains come in.”

Either way, the Pico-Kenter drain is indeed still operational and prospective improvements for the short and long-terms are in development.

Nonetheless, the Pico-Kenter drain has been the subject of a variety of controversies and complaints, mostly due to the levels of contamination and trash found in its immediate area. In a February 1989 report published by the Los Angeles Times, the Pico-Kenter drain was labeled as “one of the worst sources of pollution among the 64 storm drains that empty into the bay.” and required closures at Santa Monica Beach “on several occasions.”

Indeed, the Pico-Kenter drain serves as a terminal outlet for storm water, as it collects runoffs from various portions of the Los Angeles Basin before potentially redirecting into the local sewer systems, S.M.U.R.R.F., or directly into the Santa Monica Bay. According to Heal the Bay’s Website, “Los Angeles County’s massive storm drain systems and few remaining rivers and creeks carry an average of 30 billion gallons of storm water and urban runoff annually. Even in dry weather, 10 million to 25 million gallons of water flow through storm drains into the ocean every day – along with bacteria, trash, and other pollution.”

To help address the pollution, trash, and bacteria on Santa Monica’s beaches, local voters passed Measure V, the Clean Beaches and Ocean Parcel Tax, in 2006, which, according to the City’s civil engineering website, raised “property tax revenue to be used solely for the purpose of implementing urban runoff water quality improvements in the City in accordance with the City’s Watershed Management Plan,” further adding, “it is the most equitable source of funding to pay for new urban runoff treatment projects that will prevent our unhealthful water pollution from reaching Santa Monica beaches and the Santa Monica Bay.”

Interestingly enough, the L.A. County Deptartment of Public Health most recently gave the beach area surrounding the Pico-Kenter drain a grade of B.