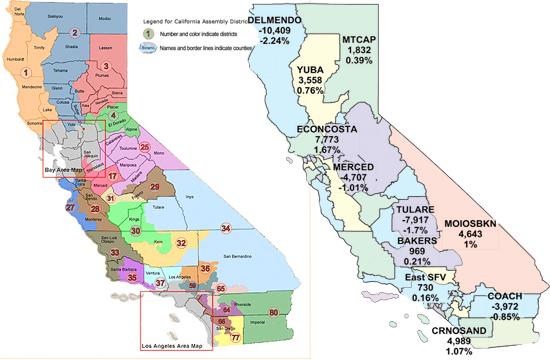 On June 10, the California Citizens Redistricting Commission released their proposal for drawing new district maps for congress, the state senate and assembly, and the State Board of Equalization. If finalized on August 15, the proposal could dramatically change who represents Santa Monica and what cities would join Santa Monica in the new districts.

Redistricting is the process when districts lines are redrawn within a state. The process occurs every 10 years after the census figures give a picture of how many people there are in the United States and where they live. Redistricting helps ensure that every person has equal representation by drawing districts with an equal number of people.

“I have long enjoyed representing Santa Monica and am disappointed that under the current draft I would no longer have that privilege. However, I recognize that the process of redrawing district lines is not final and the final maps created by the California Citizens Redistricting Commission may differ from the most recent drafts. I have no control over what the Commission decides, but when the final lines are drawn, I would be pleased to have the privilege of continuing to represent the citizens of Santa Monica.”

“These are simply the first round of draft maps and the final product could look very different,” noted Pavley in a statement. “I am disappointed that under this preliminary map I would not be representing the people of Santa Monica and that the Santa Monica Mountains would be split; however, the commissioners said they are almost certain that some of the senate district maps will change before the next round of drafts maps are released. Individual citizens and community groups should have a strong voice in how their communities are represented.

“The commission will be holding meetings up and down the state over the next two months and I urge everyone to submit written or verbal testimony to the commissioners about the importance of keeping communities of interest intact,” Pavley stated. “You can find out exactly how to do that by going to the Commission’s website werdrawthelines.ca.gov”

Santa Monica City Council member Kevin McKeown reacted to the proposed changes for the 23rd senate district by stating, “As an environmentalist and sustainability advocate, I’d prefer our districts continue to include the communities of the Santa Monica Mountains bioregion, so that we can all work together to maintain and preserve undeveloped parkland and other parts of our watershed. The South Bay may share some of our coastal issues, but our most intimate connection, including a unified school district, is to Malibu.”

Also unhappy is Malibu City Council member Lou Le Monte. “It seems to me that the present existing district lines have finally achieved the communities of interest criteria in so many ways, including the Malibu Watershed, the (Pacific Coast Highway) traffic corridor, the combined school district, our combined environmental efforts as well as basic public safety issues like fire protection and police,” said Le Monte at the commission’s June 16 public input meeting. “These new proposed district lines do not achieve these same results.”

The 41st assembly district currently represented by Julia Brownley, which includes Santa Monica, could also change dramatically because it could no longer include Calabasas, part of the Santa Monica Mountains and parts of Oxnard. Brownley reacted to the proposal by stating “it’s a preliminary map and the beginning of the conversation not the end of the conversation. The community of interest argument is what’s important here.” The California Constitution defines a community of interest as “a contiguous population, which shares common social and economic interests that should be included within a district for purposes of its effective and fair representation.

California’s 14-member commission developed their proposal based upon input they received through 23 hearings with residents throughout California, as well online and by fax and mail. During these meetings, residents described their communities, neighborhoods, and what issues are important to them. California state law mandates that the commission be made up of five democrats, five republicans, and four members from neither of the two major political parties.

Specific criteria used by the commission to draw district lines included drawing districts with equal populations and complying with the federal Voting Rights Act. This federal act prohibits voting practices or procedures that discriminate on the basis of race, color, or protected language minority status. Other criteria used included drawing districts that are connected at all points, respecting counties, cities, communities of interest and neighborhoods to the extent possible, making districts compact, having districts next within one another, and not considering an incumbent or a political candidate’s residence in crating a district.