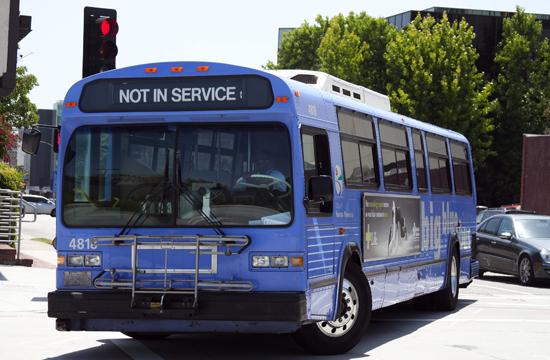 Santa Monica’s Big Blue Bus, the City’s public bus system with and annual operating budget of close to $60 million, was granted more than $16 million worth of costs with nary a discussion or individual vote at a June 14 meeting of the Santa Monica City Council.

With about 30 items on the city council’s consent calendar at its June 14 meeting, members approved at least 10 items directly related to Big Blue Bus (BBB) expenditures, including purchase of liquefied natural gas (LNG) for $12.5 million, purchase of engine parts for $900,000, air conditioning repair services for $450,000, schedule printing services for $400,000, Plexiglas window guards for $250,000, and BBB administration building roof replacement for $156,262. As all the items were on the consent calendar, council members approved all the BBB expenditures in one fell swoop; none of the items were pulled for discussion.

The biggest expense was the allocation of $12.5 million over five years for Clean Energy Fuels to contractually provide fuel LNG to at least 125 buses in the BBB fleet. In addition to fuel costs, council members also approved in the consent calendar about $560,000 for maintenance and repair of a natural gas fueling station over the course of four years, as well as an additional $160,000 (for three years) to maintain BBB’s cleaning tanks.

The second largest expense among the BBB items was the $900,000 – to be paid over three years to Cummins Cal Pacific – approved for new BBB engine parts compliant with state and federal emissions standards.

Another $700,000 was approved for aesthetic improvements, including $450,000 over three years to Bus Systems Unlimited for air condition repair services, while another $250,000 was allocated to Transit Products and Services for the purchase of Plexiglas window guards which makes it easier to correct vandalism. With the new window guards, BBB will not have to fully replace glass windows in its entirety, but instead replaced protective sheets on top of the glass when vandalized. The Plexiglas contract is also for three years.

Amongst the least expensive of BBB-related items on the consent calendar was the $156,262 expenditure to replace the roof of the bus company’s administrative building located on Seventh Street. Awarded to Eberhard, the expenditure item would essentially remove the roof currently atop the administration building and replace it with what the BBB described as a PVC membrane roof.

While the roof is being replaced, BBB officials working inside the administrative building will have to be temporarily relocated. The council has yet to determine a temporary alternate location, nor has it decided upon the design plans for the new roof. Accordingly, while the city council pushed forward tens of millions of dollars for BBB upgrades, expect a few more expenditures to be approved in order for the contract already in place to be fully executed and complete.