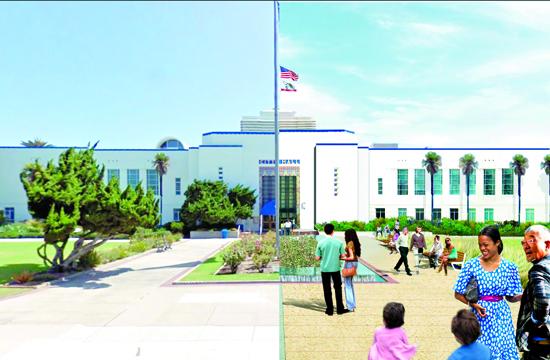 A crowd of about 200 Santa Monicans were on hand at the June 14 Santa Monica City Council’s consideration of the planned public parks to be placed in front of city hall. After a presentation by designer James Corner followed by a lovefest of public comment, the council proceeded with overall design plans and construction documents for Palisades Garden Walk, despite its $46.1 million price tag. They sought alterations to the Town Square’s blueprints, which is the portion of the project that aims to redevelop the lawn of city hall.

This call for alterations is similar to what happened at the planning commission’s meeting just six days earlier. Both council members and the speaking public frowned upon the design plans for the Town Square portion of the project.

Corner presented schematic plans of the Palisades Garden Walk and Town Square to the council shortly after wowing audiences on June 13 at the Main Library with a two-hour public lecture detailing various parks projects around the world, including the High Line project in New York City for which he is famous for having contributed to. He requested council members give him some guidance on how to maximize the designs for town square.

“It’s a good, competent … design, but its not great, it’s not fresh, it’s maybe too open, it’s not so well linked to the park on the other side [of Main Street],” Corner said. It’s not as progressive as another group in Santa Monica would like it to be. I would seek some guidance from the Council. Any advice you have would be welcome.”

Recently, the area immediately surrounding city hall, where the Town Square would be located, was declared an official landmark by the landmarks commission, therefore hampering certain design plans. The key theme of calls for alterations seemed to indicate Corner was “handcuffed” from designing the Town Square to the best of his ability, primarily due to restrictions placed upon the project’s design plans by entities such as the landmarks commission. Adjectives used to describe the Town Square included “shackles,” “lost” and “fuddy duddy.”

Landmarks commissioner Nina Fresco spoke to the council in her official capacity, defending the Town Square’s design plans as responding to the “clear and harmonious way to the historic landscape of city hall and the character-defining features that surround it.”

To the dismay of civic leaders and residents who also addressed the council during the public hearing portion of the agenda item, the landmark commission’s limitation hindered more than helped the Town Square’s final design plans submitted to City officials for approval.

“We need to … give James (Corner) more freedom to do a better design of Town Square.

I think the design has to go back a little bit and allow Mr. Corner to punch it up a little more. Don’t allow it to be diluted too much,” said Phil Brock, a parks and recreation commissioner.

Just the same, Richard McKinnon, also of the parks and recreation, said comparing the neighboring parks of Palisades Garden Walk and Town Square yielded virtually polar opposite responses despite the fact that the design plans for both venues are sourced from the same person.

“When you look at it today, you see two sides that are quite different,” McKinnon said of the design plans for both projects. “One has that element of magic, and the other side you see a design that looks as if it’s handcuffed. What the council needs to do is reassert to Corner that we want the single best design he is capable of producing.”

Council members were not too thrilled about Town Square’s design plans either.

Still, the overall vibe of the design plans were more positive than not, with design plans for Palisades Garden Walk receiving very few complaints. Ultimately, the council approved the execution of the contract documents and design plans in general, but directed staff to return with alternative designs for Town Square.

“This park will be used for generations,” Brock told the council. “The citizens, the tourists will use this as a gathering spot … not a park where people walk through.”

Council members Bobby Shriver and Bob Holbrook, while expressing support for the park in principle during the budget workshops, both questioned whether the $46.1 million in redevelopment funds allocated to the project was too high, especially in light of potential cuts in redevelopment funds by Gov. Jerry Brown.

At Tuesday’s council meeting, among the only protests of the Palisades Garden Walk plans focused on the addition of family friendly restrooms.