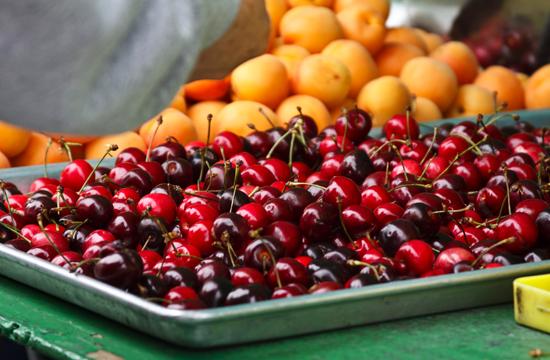 Summertime just might be the sweetest season at the farmers’ markets, an abundant time when you’ll find fruits and veggies that are juicier and tastier than what’s available at the big supermarkets. Here’s a taste of the markets’ summer bounty that’s just beginning:

Local cherries are out in force at the markets, and there’s only a few weeks left in this year’s cherry season. Murray Family Farms in Bakersfield brings a handful of varieties like Skeena, Sweetheart, Royal Rainier, and Tulare to the Wednesday market on Arizona. Each variety has a subtly different character, and all varieties are from the UC Davis breeding program, said Sean Murray.

“For us, it’s been an extremely good year for cherries,” he said. The family is hoping there’ll be no rain falling on the cherries, because rain makes the cherries split. Sean said 90 percent of the farm’s cherries are exported to Japan, where they fetch astronomic prices. Murray Farms also has early olallieberries, a very tart blackberry variety that’s good for baking. All varieties of Murray Farms cherries were selling at $6 for a pound-plus bag; olallieberries were $4 a basket.

When buying cherries, look for batches with stems that are fresh and bright green, then cherry-pick the big, firm, meaty ones with nice color. Avoid soft or blemished cherries.

The arrival of Fitzgerald’s Premium Stone Fruit at the Wednesday market on Arizona Avenue is a sign that it’s time again for the summertime bliss of biting into a ripe, juicy peach. For decades, Fitzgerald Kelly has brought tree-ripe stone fruit – peaches, nectarines, plums, and apricots – that are ready to eat within a day or two, unlike the hard, sad fruit you often find at the supermarkets. “I’ve raised a generation of customers,” farmer Kelly said.

Early varieties of peaches, nectarines, plumcots, pluots, donut peaches, and apricots, including the Robata apricot, were available last week. In a few weeks, look for the Elgin Marble, a miniature apricot with a big flavor and small pit, the Lady in Red, a flavorful yellow eating peach, or the June Lady, “a phenomenal cooking peach,” according to Kelly. The Arctic Rose is a white nectarine that’s not much to look at, but the flavor is intensely sweet.

Despite the cool weather in Reedley, near Fresno, the acid and sugar in this year’s crop are nicely balanced, Kelly said. Look for peaches that yield to gentle pressure at the stem end of the fruit, he advised, and avoid fruit that has a greenish tinge on the stem end. If you’re buying several fruit, it helps to bring a box to carry them home, because these delicate fruits bruise easily when carried in a bag. All fruit $3.50/pound.

Coastal Farm’s tomatoes are known for their flavor and creative variety, and every summer the 17-acre farm virtually turns into a tomato farm. Compared to last year’s cool weather, “the Santa Paula weather’s been awesome; we’ve been blessed by the gods this year,” said Coastal Farms’ Mark Carpenter. He’s planning a huge tomato crop, about 80,000 plants over the summer, including some new varieties that he’s made. The Early Girl variety is a sweet favorite, and there will also be Italian sauce tomatoes, a dozen types of cherry tomatoes, and two dozen types of heirlooms.

Coastal Farm is also famous for another summer crop – squashes – in varieties such as green and gold zucchini, yellow crookneck, middle eastern squash, patty pan squash, and the eight-ball squash. The farm’s first crop of squashes is peaking right now, according to Carpenter. Coastal Farm sells at only the Wednesday and Saturday Arizona Avenue markets and is usually among the first to sell out.

When picking tomatoes and squashes, let the farmer guide you toward the varieties that match the flavor and texture you want.

A few farmers bring this deeply hued summer vegetable to the markets. Yasutomi Farms has indoor-grown Japanese eggplant that makes for good grilling, baking, and tempura. “Growing them indoors gives them a thinner skin; they tend to be sweeter and have fewer seeds than an Italian eggplant,” said Jake Yasutomi, who comes to the Wednesday and Saturday markets on Arizona Avenue. Japanese eggplants are available from June to October. Look for eggplants with a smooth, shiny skin and signs of freshness at the stem end.

Saturdays from 8 a.m. to 1 p.m. at Virgina Avenue Park